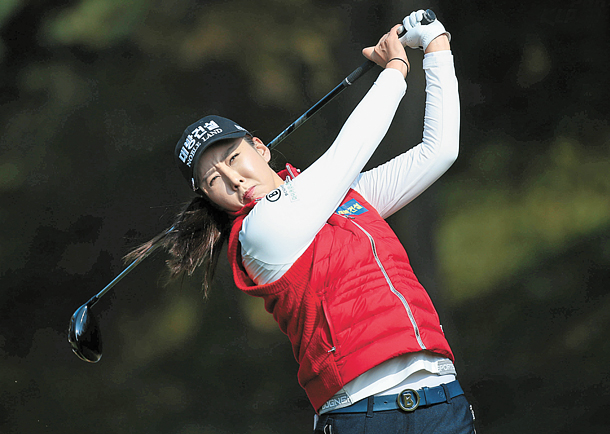 Hong Jin-joo tees off during the final round of the Fantom Classic on Sunday. Hong claimed her first title in 10 years after three rounds of playoffs. [KLPGA]

It was yet another climactic week in the KLPGA.

This year’s Fantom Classic concluded with one of the most dramatic final rounds of any KLPGA event this year, going all the way to a third playoff round until the outcome was finally determined. At the end of the day, it was veteran golfer Hong Jin-joo who emerged as the victor. It was her first title in a decade.

During the final round of the Fantom Classic at the 88 Country Club in Yongin, Gyeonggi, on Sunday, it was at first the overnight leader Heo Yoon-kyung and runner-up Jang Su-yeon who remained at the top. They were the favorites to take home the trophy.

Then Hong, tied for third at the time, emerged seemingly from nowhere to join the lead group.

After getting a second straight birdie at the 17th hole, the 33-year-old veteran joined Heo and Jang. With three co-leaders after the 17th, everything came down to the outcome of the 18th hole.

Jang had finished the 18th with a par and was left to watch on the sideline as Heo and Hong went at it in the final hole.

Heo’s 18th-hole tee tricked into the rough, but her second shot from the rough was solid with the ball finding the fairway. Heo’s approach eventually landed on the far side of the green.

Meanwhile, Hong kept her tee shot on the fairway, but her third shot also found the far side of the green near where Heo’s ball landed just a few minutes before. Whoever made a birdie here would clinch the title from the tourney.

Both of them, though, ended the final hole with a par, forcing the entire competition into a three-way playoff, which was played as a sudden death round at the 18th. The three golfers finished the regulations six under par.

After teeing off in the first round of playoff, all three landed their balls safely on the green, though the location varied greatly. Hong was the first to take the birdie putt from the far side of the green, which did not have much force and curved to the left to sidestep the hole. Heo’s putt, on the other hand, was too strong and eventually traveled past the hole. Jang, who was at the most advantageous position for a birdie, barely missed the hole to end the first round of playoff with a par.

Heo and Hong also nailed par putt, and the playoff went into a second round.

Even then, they were unable to settle the score, and the gallery had to watch as the tourney went into a third round of playoff. By then, dusk had come, and the three had to play the round underneath lights.

Jang was eliminated from the race first as she finished the round with a bogey. Then Heo’s par putt also missed the hole, leaving Hong with a golden opportunity to take her first win in 10 years.

Hong did not let this chance go by, sinking the ball to conclude the prolonged match and finally take the trophy.

“First of all, I am happy to win my first title in 10 years,” said an emotional Hong. “I hit 6-under during regulations, which was my goal, so I went into the playoffs with less burden. At the last putt, I was nervous but I thought about my family. I am hoping to extend today’s pace until the end of this year.”

Park Sung-hyun, who has had seven wins from the KLPGA this year, ended 2-under tied at 12th in the leaderboard. Park finished the first round of the tournament at the top of the leaderboard, but bogeys she made in the second day forced her to step down from the lead.