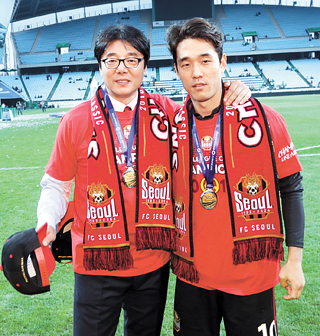 After the 1-0 win over Jeonbuk Hyundai Motors on the road on Sunday, Hwang Sun-hong, the manager of FC Seoul, gave Park Chu-young a big hug as the forward scored the only goal of the match. Not only did Park’s decisive goal ensure Seoul’s victory, it also gave Hwang and the rest of the team the trophy from this year’s K-League Classic.

Leading Seoul to the top this year, Hwang pocketed another comeback title win. He led his former team, the Pohang Steelers, back in 2013, taking down Ulsan Hyundai FC, who the Steelers were trailing behind by two points until the final match, while on the road to take the league trophy as well as manager of the year award. Repeating the similar feat just three years later with yet another team, Hwang seems to have a knack for turning the tide.

Park, it turns out, was the winning card Hwang draw to topple Jeonbuk and deny their three-peat. Park is a former Arsenal striker who in 2012 led the Korean national team during the Olympics to take bronze.

Jeonbuk and Seoul went into the match on Sunday tied with 67 points but with Jeonbuk in the lead by goal difference. This meant Seoul had to take three points by taking down Jeonbuk, while Jeonbuk would win the title as long as they managed a draw. Until Sunday’s showdown, Jeonbuk had the odds on their side as they had a better head-to-head record against Seoul with four wins and one loss. Jeonbuk took down Seoul continuously in the league this year, also ousting them during the Asian Champions League (ACL) semis with an aggregate score of 5-3. Jeonbuk claimed a 4-1 victory in the first leg of the ACL semi-finals, while Seoul came back and beat their rivals 2-1 in the second-leg, the only occasion this year when Seoul collected a win over Jeonbuk.

Although Park did not start the game on Sunday, he was substituted in midway through the first half as one of the three forwards up front. Hwang’s move to place the 31-year-old paid off about 10 minutes after the start of the second half when Park received a through pass to drill a goal past Kwoun Sun-tae, Jeonbuk’s goalkeeper. Park, who was once deemed a football prodigy, had seen his career sag in the past few seasons, with his European stint in the French league’s AS Monaco and the English Premier League’s Arsenal both ending poorly, forcing him to return to the domestic league last year. As if tearing away years of disappointment, Park ripped off his shirt in celebration of the goal. Although he received a warning for the act, he seemed too filled with joy to care.

During the press conference after the game, both the skipper and the player could not hide their elation. “It was a difficult game,” said Hwang. “But the players remained composed throughout the game, which I believe was the impetus behind our win. It is also our fans, who travelled all the way down here, who gave us strength.”

Hwang went on to explain he had the win from 2013 in the back of his mind and knew Seoul had what was needed to repeat history. “Frankly,” he said, “I was eager to win all the competitions we were in, including the ACL, and I think my ego got in the way of our success. It’s tough to take everything but I think we’ve done a good job of overcoming some bumps along the way.”

For Park, this was the first K-League Classic title since he made his pro debut in 2005. “I am still somewhat dazed,” Park said. “I remember saying at the onset of the season that my goal for this year was to avoid injury and now here I am, winning the league. I want to enjoy this. Frankly, losing continuously to Jeonbuk has hurt the players’ pride.”

“I wanted a complete win with my players,” added Hwang, referring to the nine-point deduction that Jeonbuk received during the mid-season, which narrowed the point-gap between Jeonbuk and Seoul and made it possible for Seoul to have a shot at the title once more. “Next year, my players and I will claim the title without any external factors.”

Now with the Classic title on the shelf, Hwang and Park will now be shooting for a double crown. Hwang has already been there in 2013, when he led the Steelers to top the FA Cup after capturing the league title. If Hwang picks up a double crown this year, he will be the first manager in the K-League to claim one with two separate teams. In the finals of this year’s FA Cup against Suwon Samsung Bluewings, one of Seoul’s main rivals of the league, Hwang says there is no room in his mind for second place.

Choi, the former skipper of Seoul who left in June to take the helm of Jiangsu Suning FC in the Chinese Super League, also sent a congratulatory remark after hearing the good news. “I am happy for Seoul,” said Choi. “I have felt great remorse and guilt for leaving Seoul but their win proves that Seoul can pass any test in front of them and still stand strong. Hwang’s contribution to the team was amazing. He is a great manager and there is no doubt he’s showing the mastery of a great football skipper.”