Source of the fury

Source of the fury 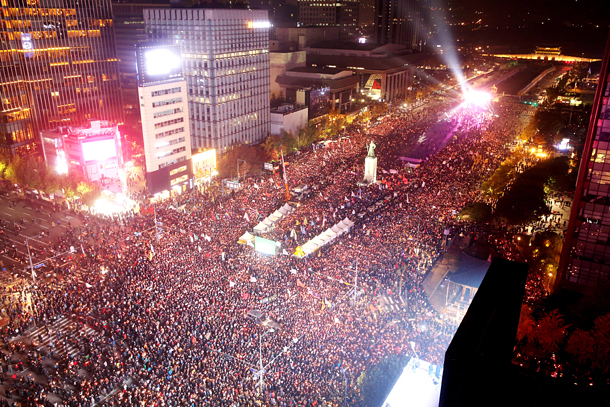 No matter how you define the current state of Korea, it is an emergency situation. The proposed solutions — a prime minister with more authority, a nonpartisan cabinet or the resignation of the president — can hardly resolve the tangled mess we face. But hopefully we can find wisdom from reflecting on ourselves and listening to the voices of the people that filled the downtown streets on Saturday.

In fact, this is not the first time in Korean politics when friends and families of the president were involved in corruption and the president had an unofficial and personal inner circle. So what has made the people so furious? What was the energy that prompted as many as 200,000 people to come out to Ganghwamun Square that differed from corruption cases of the past? What is the message? Failing to find the fundamental causes of the public outrage will make it even harder to find a solution.

First, citizens are asking, “Is this really a nation?” They are referring to the decline of the government’s public role. When the public nature of the government was damaged in the past, presidents or their relatives could not distinguish what was personal and what was public.

Now it has been revealed that the current administration — especially the president — does not understand the concept of the public interest at all.

All political communities exist in inevitable potential discord. Politics is a process of finding, preventing and resolving conflicts, and a policy decision can produce a winner and a loser. Proper governments have the authority to persuade the losers in a situation that the decision was for the greater good, or the public good of the community.

The public interest is not protected simply by a president who severs ties with his or her family and gets rid of their personal life. It is not something that can be attained with an “innocent heart” or “conviction to save the nation.” It is only possible when legal procedures are complied with, the process of discussion and persuasion is used and all records are faithfully and strictly kept. The current administration failed to meet these minimum requirements for the public interest.

Second, there are rumors of shamanism and cult activities because many professional areas under the government’s jurisdiction were dominated by private interests and an extreme lack of expertise. While further investigation is needed, it has been revealed that the cultural and sports field have been meddled with. When the government made decisions on unification and foreign policy, the Blue House gave orders irrespective of the opinions of its own related ministries.

In all administrations, there can be friction between career bureaucrats who are not affected by politics and the officials appointed by the president. We’ve seen many cases of election campaign staff filling ministerial, vice-ministerial and presidential secretary positions. The effect of that is to sway the national administration’s decision with political judgments. But no past government has failed to justify its own decisions and judgments in as many administrative fields as the Park Geun-hye administration.

The focus of the current catastrophe is the grave nature of what has yet to be discovered. The entire nation and Korea’s allies are beginning to doubt the decision-making process behind all government policies, from the shutdown of the Kaesong Industrial Complex to the Terminal High Altitude Area Defense (Thaad) deployment and the state-authoring of history textbooks. Aside from the legal procedure of prosecutors or an independent counsel proving criminal allegations, the government must prove its innocence to the citizens and the world to prove the legitimacy of its own policies.

Another source of fury among the people is the systemic infringement on the principle of fairness. From favors in college admissions and military service to extorting hundreds of millions of dollars from conglomerates, the kind of illegalities that normal people cannot even imagine are dragging down the entire nation.

The principle of fairness and equity should be applied to all members of the community so that they can bear the same social responsibilities and share the same pains. We all find our college admission system competitive, military service painful and supporting families challenging. Now, who can tell our part-time workers, young job seekers and hard-working citizens to bear with the pain for the nation’s competitiveness and growth?

The search for sources of fury, the collapse of the public interest, the absence of expertise and infringement of fairness does not prove that three decades of political advancement has been an illusion. We are drawing a new blueprint for the community of our future. We must address our outrage and correct the wrongs, as we believe we can draw a new blueprint for the future of our community.