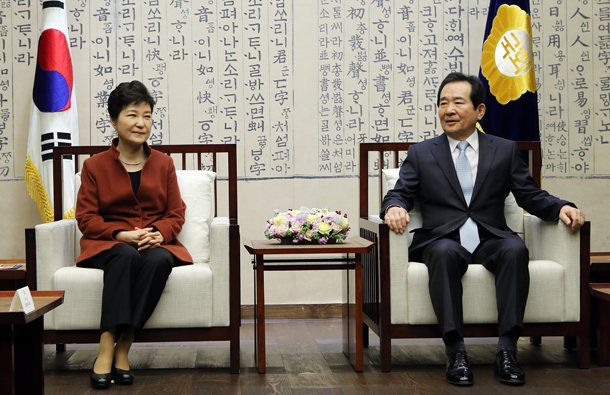 President Park Geun-hye visited the National Assembly Tuesday and asked it to recommend a new prime minister candidate, who may end up running the government instead of her.

It was the president’s latest attempt to contain the snowballing scandal about the behind-the-scenes influence wielded by her close friend Choi Soon-sil.

This could mark the first prime minister selected by the National Assembly.

“I came to see the speaker like this because I believe it is a great responsibility to normalize state affairs,” Park told Chung, answering demands that she withdraw her nomination of Kim Byong-joon as prime minister last week.

“Our economy is both domestically and externally facing difficulties,” Park also said. “There is a continued slump in exports, and domestically, there is hardship in restructuring the shipping and shipbuilding industry, so I ask the National Assembly to join hands to overcome the economic crisis.”

Chung told Park that the new prime minister’s authority has to be made clear, and that “a prime minister that is not approved by the opposition cannot be appointed.”

The opposition parties and even some members of Park’s Saenuri Party want her to yield governing power to a prime minister if she wants to avoid being impeached or forced to resign.

Park named Kim, who served as a chief policy adviser to the late liberal President Roh Moo-hyun, as her new prime minister nominee last Wednesday, sparking an immediate backlash by the opposition because she failed to consult them on the decision. Nor did she say how much power she would surrender to him. 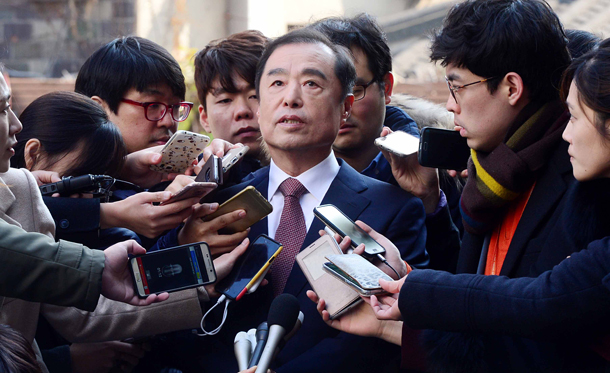 Kim Byong-joon, the prime minister-nominee, speaks to reporters about Park’s decision to pass the selection of the prime minister to the parliament on his way to an office in Tongui-dong, next to the Blue House, on Tuesday. [NEWSIS]

Some 50 opposition lawmakers and their aides holding picket signs staged a rally demanding Park stop directing state affairs and step down as president when she arrived at the National Assembly complex in Yeouido, western Seoul. Park avoided eye contact with them.

In the afternoon, Speaker Chung held an emergency meeting with floor leaders of the ruling and opposition parties to discuss the president’s request for the parliament to select a prime minister.

The speaker and floor leaders of the three major parties - Chung Jin-suk of the Saenuri Party, Woo Sang-ho of the Minjoo Party of Korea and Park Jie-won of the People’s Party - were said to have discussed what it meant for the cabinet to have effective control of state affairs.

Some opposition lawmakers immediately said that Park’s proposal was not enough and that the president needs to make it clearer that she will hand over control of the country to a new prime minister and a nonpartisan cabinet.

Moon Jae-in, former chairman of the main opposition Minjoo Party and its presidential frontrunner, said to reporters on Park’s proposal, “What is important is not simply a recommendation by the National Assembly,” of a prime minister. Moon added that the opposition wants Park to leave all state affairs to the prime minister and step aside.

“It seems that this aspect was not reflected in her words,” he said.

Ahn Cheol-soo, another presidential hopeful and former chairman of the opposition People’s Party, wrote through his Twitter account, “This is insufficient compared to what the people want from her. She expressed her intent to lead state affairs. Her words were ambiguous and nothing was clear.”

He continued, “Based on how she has acted thus far, I cannot help but suspect this is just a ploy to buy more time. The very least the people demand of her is to completely take her hands off state affairs.”

Ahn added, “President Park has to make a promise to hand all authority to the prime minister, and her stepping down as soon as one is appointed is the last patriotic act she can do for the Republic of Korea.”

But Saenuri Chairman Lee Jung-hyun said to reporters at the National Assembly, “This is complying to and respecting the demands of the opposition.”

“The president understands very well the unified demand of the opposition party for a neutral cabinet,” he added, “and realizes that this is not just a political demand.”

Lee said, “She has conveyed her strong determination by coming to the National Assembly in person, and asking the opposition to recommend a prime minister, and it seems to be her will to put this into practice.”

On Monday Rep. Kim Moo-sung, former chairman of the Saenuri Party, urged Park to give up her ruling party membership, criticizing her for allowing her lifelong friend Choi to interfere in state affairs. He urged Park to accept the National Assembly’s demands to select a prime minister and create a nonpartisan cabinet to run the country.

Kim said Saenuri Party Chairman Lee and other Park loyalists in the leadership must resign to save the party.

Park has made two public apologies broadcast on television but large rallies continued to be held demanding she resign.

Kim Byong-joon told reporters on Park’s decision to pass the selection of the prime minister to the parliament, “My original intent was for there to be agreement between the ruling and opposition parties.”

But he said this shouldn’t be “considered a withdrawal” of his nomination as prime minister. “The ruling and opposition parties will recommend a prime minister and if the president agrees to this, then my position will naturally expire.”

He added, “Because it will naturally expire, there is no reason for me to step down.”

Park’s five-year term comes to an end in February 2018.