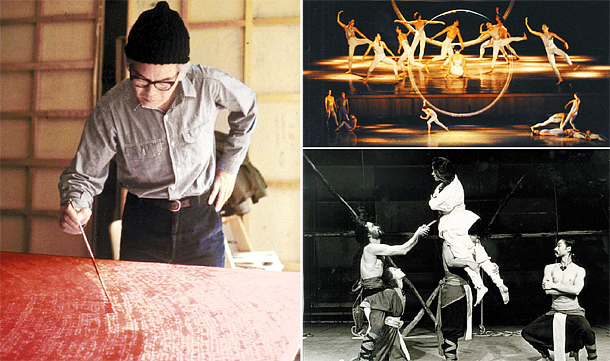 Numerous Korean artists have been supported by the John D. Rockefeller 3rd Fund’s Asian Cultural Council since the early 1960s. The recipients include: 1. Renowned abstract painter Kim Whanki (1913-74) had received a fellowship in 1964, a year after his arrival in New York. 2. Ahn Ae-soon, artistic director of the Korea National Contemporary Dance Company, received the grant between 1995-6. The photo shows her work of a contemporary dance performance “Meeting,” which won the grand prize at the Seoul Dance Festival in 1990. 3. Professor Kang Man-hong of the Seoul Institute of the Arts received the grant and in 1987 and was able to stage his play “Maya,” which reinterpreted Shakespeare’s “Macbeth.” [JOONGANG ILBO,SEOUL INSTITUTE OF THE ARTS]

There’s also the world renowned video artist Nam June Paik (1932-2006). He created works that are now installed in monumental places across the globe, and is hailed by the international community.

Playwright Yoo Chi-jin (1905-74), who was also referred to by his pen name Dongnang, is acclaimed for having played a critical role in promoting Korean theater. Thanks to his insights and efforts, the Namsan Drama Center managed to open its doors in 1962. The Drama Center still exists today.

What these late pioneers have in common - other than the fact that they each marked new eras in their respective disciplines during their time - is that they were supported in various ways by the Rockefeller Foundation, before they made their names known in the world.

Modern master Kim received a fellowship from the Rockefeller Foundation in 1964, a year after his arrival in New York. During that time, he struggled with financial difficulties and barely managed to rent out a studio. With the support from the foundation, he was able to continue painting and holding exhibitions.

As for Paik, it was 1967 when he first received support from the Rockefeller Foundation, according to Afterimage, a journal of media arts and cultural criticism, published in January 1987. The article said that Howard Klein, who was newly hired at the foundation, bailed out Paik, who had run out of money, by “orchestrating a $13,750 grant to the State University of New York at Stony Brook for Paik to become a consultant in communications research.” During that time, Paik wrote a report for the foundation, which became his most important essay, “Expanded Education for the Paper-Less Society.” He became an artist-in-residence at the foundation and received support for his two large collaborative satellite broadcast projects, “Good Morning, Mr. Orwell” (1984) and “Bye, Bye Kipling” (1986) as well as for his retrospective exhibition at the Whitney Museum of American Art in 1982, according to the article.

Although not as much as the other two artists, playwright Yoo was also able to establish the Drama Center in 1962 with supports from diverse foundations including the Rockefeller’s.

In fact, the three artists were not the only ones who received help from this philanthropic American family.

According to the list of Korean grantees of the award, there are about 120 Korean fine artists, performing artists, art historians, archeologists, and musicians who have been funded by the Rockefeller Foundation. And the list grows each year.

Asian Cultural Council, a non-profit foundation that operates out of the John D. Rockefeller 3rd Fund was established in 1963 to support individuals and organizations in the field of arts in Asia and the U.S.

Some of the names include Ahn Ae-soon, who is now the artistic director of the Korea National Contemporary Dance Company; Lee Nan-young, who is recognized as the “living witness of the history of Korean museums” and regarded as the first female archeologist in Korea; Sung Wan-kyung, first female museum curator and first female director of a national museum in Korea; Kim Young-won, former director of the National Institute of Cultural Heritage, among many others.

According to the ACC, it has supported, for the past 53 years, about 6,000 Asian and American artists and scholars in diverse fields including architecture, art history, archaeology, film, movie, music, painting, sculpture, theater, and so on.

“Whether Asian or American, whether a cutting-edge painter or a traditional dancer, whether a classical musician or a modern cultural archeologist, - any gifted individual artist or scholar who seeks to grow in his or her craft or field can apply for funding,” said the ACC in a press statement.

Going a step further than just supporting numerous Korean artists, the ACC decided to present the 2015 John D. Rockefeller 3rdAward to Yoo Duk-hyung, president of the Seoul Institute of the Arts, making him the first Korean to receive the award. The award is made biannually, according to the ACC, “to recognize an individual who has made a significant contribution to the international understanding and appreciation of the arts of Asia.” Funds for the award, $50,000, are made by an endowment gift to the ACC from the JDR 3rd Fund.

The ACC visits the country of the awardee to present the award. Yoo’s award ceremony will be held on Sunday at the Seoul Institute of the Arts in Ansan, Gyeonggi. Wendy O’Neill, chairman of the ACC and John D. Rockefeller Sr.’s great-great-granddaughter, as well as David Rockefeller Jr, 75, director and former chairman of Rockefeller & Co., are among many others who will visit Korea for the event.

“Mr. Yoo is a prominent cultural figure in Korea and the visionary leader of the Seoul Institute of the Arts, a professional arts training academy renowned both regionally and internationally,” said the ACC in a press statement.

Yoo was also a recipient of the ACC’s support during the 1960s and 70s for “such personally-transformative endeavors as study at the Dallas Theater Center, the completion of his master’s degree in theater at Yale University, and the chance to observe theatrical activities throughout the U.S.,” said the ACC.

After coming back to his motherland, he took over leadership of the Namsan Drama Center, which was founded by his father, the playwright Yoo. He then established a school that encompasses a professional arts academy, now known as the Seoul Institute of the Arts.

“The ACC has been supporting Korean artists based in America for half a century now since the early 1960s so that our artists, who were often in financial difficulties, could continue their research and creative activities,” said Yoo.

As the first Korean recipient of the JDR 3rd Award, Yoo said that he hopes to “expand exchanges between Korea and the ACC so that more great Korean artists can be nurtured with sufficient support.”

According to Yoo, since the ACC not only grants scholarships for tuition in the U.S. - it finances tickets to all the museums, galleries, and performances in the U.S. by providing reimbursements - it really helps artists to broaden their understanding of arts and culture.

Having experienced the indispensable support in his earlier years, Yoo acted as a bridge as well, to connect many Korean artists with the ACC so they too can receive help.

Park Il-kyu, who is currently a professor of acting at the Seoul Institute of the Art’s School of Performance, said he heard about the ACC through Yoo back in 1984 when he was uncertain whether to pursue further education due to financial difficulties and applied for the grant.

“Ralph Samuelson, who was then, the director of the ACC came to my school at the New York University Tisch School of the Arts to see my end of the year performance that I choreographed titled ‘Four in One,’” said Park. “After a month, I got a call from the ACC saying that I was selected as the grantee of that year.”

Thanks to the support, Park was able to go to graduate school with a full scholarship and received $500 per month as living expenses, as well as paying for tickets to all the performances that he wanted to go see in New York.

“Thanks to the support, I was able to finish my master’s degree and stage my graduation piece titled ‘Where am I Standing?’ which the professors acknowledged as ‘the most phenomenal piece of the year,’” he said. “Had it not been for the support, I would’ve had to scrap my dreams as a creator of performing arts. I have endless respect for such policies and social systems of the U.S. that support artists from Asia, without any strings attached.”

Kang Man-hong, also a professor at the Seoul Institute of the Arts, was selected as the grantee in 1987 after being evaluated for his portrayal of Jesus in “Stabat Mater” in New York.

For Kang, he said the $30,000 grant he received from the ACC, on top of tuition fees and free tickets to performances, is especially unforgettable as he was able to stage his theater performance “Maya,” which reinterpreted Shakespeare’s “Macbeth,” with the money.

“I received great reviews from the New York Times with ‘Maya’ and it led me to be cast as a leading role in ‘Oedipus’ and also star in ‘Seduction,’” said Kang. “As a creator, the support from the ACC was indispensable.”