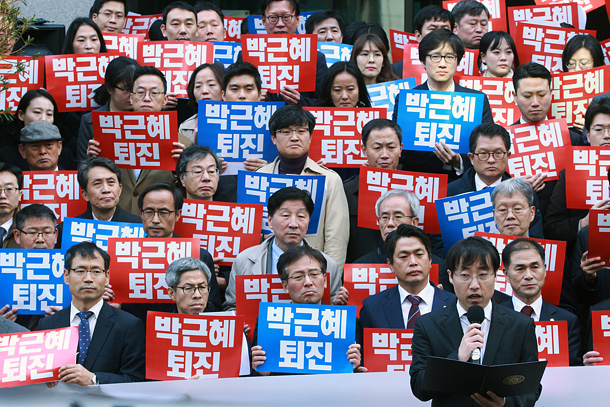 Lawyers from the Korean Bar Association stage a rally in Seocho District, southern Seoul, on Thursday, to urge President Park Geun-hye to step down. A large rally is expected tonight in Gwanghwamun Square in central Seoul. Many protesters are traveling from provincial cities to Seoul to take part. [PARK JONG-KEUN]

As many as one million people may take to the streets of Korean cities Saturday night calling for the resignation of President Park Geun-hye over the ever-mushrooming scandal about the influence wielded by her powerful friend Choi Soon-sil, according to rally organizers.

The third weekly candlelight vigils held since Oct. 29 across the nation are expected to be the largest so far.

In Seoul at least 200,000 are expected by organizers. While some 30,000 attended the first Seoul rally, according to rally organizers, nearly 200,000 people crowded Gwanghwamun Square on Nov. 5.

Police said that some 170,000 people are expected tonight in Seoul.

The last time an antigovernment rally grew so big was in 2008, when around 700,000 people gathered to protest U.S. beef imports, according to organizers at the time. Police estimated the biggest crowd at that time at 80,000.

According to organizers, Saturday’s candlelight vigil in Gwanghwamun Square will be attended by 10,000 people from Gwangju. Some 80 civic groups will lead the Gwangju protesters on buses and trains into the country’s capital. Another 10,000 are expected from South Jeolla on chartered buses.

Some 12,000 people will be joining from North Jeolla, 22,000 from Daejeon and South Chungcheong, 20,000 from Busan and Ulsan, and 10,000 from Daegu and North Gyeongsang, according to organizers. High school students will be traveling to Seoul from Gwangju, Yeosu and Suncheon.

For many, distance is not an issue. Some 1,000 Jeju residents are flying into the city on some 30 flights. The organizers from Jeju will hold a press conference at Jeju International Airport on Saturday morning before they fly.

“We will unleash the wrath of Jeju in Gwanghwamun Square,” said Boo Jang-won, a director of the Jeju branch of the Korean Confederation of Trade Unions.

The candlelight vigil will be held from around 4 p.m., and a march is to start from Seoul Plaza around 5 p.m. and proceed in four different routes, including straight through Gwanghwamun Square, to converge at the Naeja-dong Rotary near Gyeongbokgung Station. The road leading to the Blue House from there will be blocked off, according to police.

Police have approved the four routes on Friday, compared to times in the past when protesters’ requests to march through certain areas of Seoul were denied by police. Police said the appropriate number of officers needed to prevent accidents and manage traffic - as well as to prevent crowds from reaching the Blue House - will be available.

Meanwhile, opposition party lawmakers announced Friday that they will be joining the rally.

“President Park’s last gesture toward the people of Korea should be to take her hands off the helm of state affairs and to submit to a prosecution investigation,” said Choo Mi-ae, the Minjoo chairwoman. “Trump is Trump, Choi is Choi, and Park is Park,” said Park Jie-won, acting chairman of the People’s Party. “Park had better not try to hide behind the public’s interest in the results of the U.S. election.”

According to Gallup Korea on Friday, Park’s approval rating remained at 5 percent, the same as last week, and she received zero percent approval from respondents in their 20s.

“How the rally goes will determine how this nation tackles this problem,” said a Minjoo lawmaker in anonymity. “It’s hard to see what lies ahead of us with the people so angry and the president still resisting.”