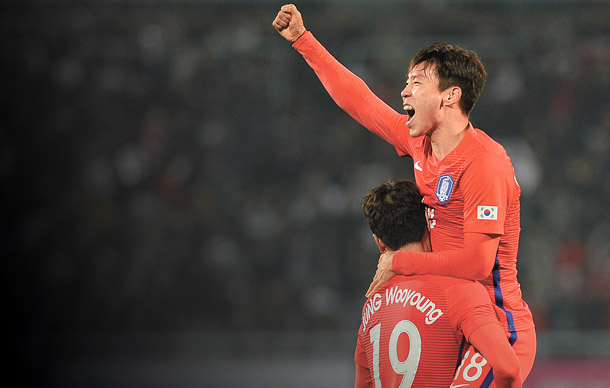 Lee Jeong-hyeop celebrates his goal against Canada on Friday. With a 2-0 win over Canada, Korea now looks to extend its momentum into tomorrow’s match against Uzbekistan. [NEWSIS]

Uli Stielike and the Korean national football team took down Canada 2-0 on Friday, giving the opponents no chance to flip the match around. Now with the tune-up game out of the way, Stielike’s side will look to extend this win and defeat Uzbekistan tomorrow to boost its chance of a ninth-straight World Cup berth.

During the international friendly on Friday against Canada at Cheonan Baekseok Stadium in Cheonan, South Chungcheong, Korea scored two back-to-back goals in the first half to send the visitors home with a loss. With key players from Europe sitting out - including Ki Sung-yueng of Swansea City, Lee Chung-yong of Crystal Palace and Son Heung-min of Tottenham Hotspur - it was the K-Leaguers who lifted the team with Kim Bo-kyung, a midfielder from Jeonbuk Hyundai Motors, and Lee Jeong-hyeop, a forward from Ulsan Hyundai FC, netting the goals for Korea.

“Needless to say, we played a great game today,” said Stielike, the skipper of the team, after the match. “We dominated the pitch the entire match. We’ve had some dangerous moments, but other than that, we dominated the pace of the game.”

The German-born skipper was especially satisfied about Lee Jeong-hyeop’s performance. “Lee showed the movements that we’ve known him for,” Stielike said. “He has so much to offer for our team. He’s good with off-ball movement and finding empty spaces. He also is a work horse in defense. I was satisfied.” 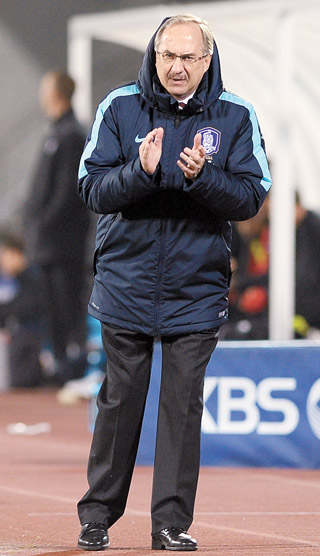 Uli Stielike, Korean football team manager, cheers for his players during the match against Canada on Friday. [NEWSIS]

Lee has been absent from the team for seven months as his performance with the K-League club failed to meet Stielike’s expectations, but the manager brought him back on this time around, saying he needs the mobility up front to create space and goal-scoring opportunities.

Stielike also said the team’s defense did everything they were asked to do, especially keeping the defensive line solid on the either end of the flank. “I emphasized this to the players before the match,” the skipper explained. “They have some tall players in Canada, which means if we give them a set-piece play opportunity, they may capitalize on it. But the full backs pulled it off.”

Canada is ranked 110th in the FIFA rankings, so the friendly match against it for No. 44 Korea was considered nothing but a rehearsal before the big game against Uzbekistan tomorrow.

Korea suffered a disappointing 0-1 loss to Iran last month, after which Stielike came under heavy fire, with some even calling for his resignation, particularly after he remarked that Korea lacks a decent striker and that this was the reason for their loss. The team and manager were thus in dire need of a morale booster, and now with the win over Canada, Stielike had delivered one - although to turn public sentiment around completely he’ll need a victory tomorrow.

The English Premier League trio - Ki of Swansea, Lee of Palace and Son of Spurs - are expected to show up for tomorrow’s match, although it’s questionable whether they will be in top condition as they were reported to be struggling with injuries. Lee was said to have injured his foot during the practice last week while Son and Ki were reportedly recovering from fatigue after traveling and playing in the English league for their clubs.

“We have some players who did not play today,” Stielike said when asked about his strategy for the match tomorrow. “I also pulled out Kim Kee-hee [a defensive midfielder from Guangzhou Evergrande in the Chinese Super League] out of concern that he might injure himself before Tuesday’s match. I need to evaluate every card in hands and ponder my next move. Right now, it’s difficult to say who I will send in for the game. Whoever gets to play, I hope they play to their fullest.”

Regarding Korea’s prospects against Uzbekistan, Lee Young-pyo, a retired midfielder/defender who played for Spurs and the national team back in 2002 when Korea reached the semi-finals of the World Cup, said, “Under Stielike’s watch, the Korean team boasts over 90 percent of a winning chance when it scores the opening goal.”

The key player to watch for from the Uzbek squad is Server Djeparov, a midfielder who currently plays for Lokomotiv Tashkent, an Uzbekistani club based in Tashkent. The 34-year-old footballer has spent five years in the K-League Classic, playing for FC Seoul, Seongnam FC and Ulsan Hyundai, and thus is familiar with Korean football. “He poses the greatest threat for Korea,” said Kim Ho-kon, the vice-president of the Korea Football Association and former player himself, adding he is the key player to contain if Korea was to claim a win over Uzbekistan tomorrow.