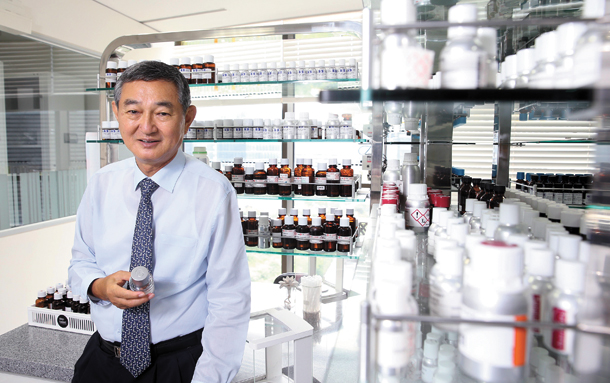 Cosmax CEO Lee Kyoung-soo holding GD perfume at the research lab in Pangyo, Gyeonggi. The perfume sold under the brand Moonshot Cosmetics, an affiliate of YG Entertainment, sold 100 million won (857,150 Dollar) in a day when it launched in June. [KIM SANG-SEON]

China’s market for cosmetics is big and about to grow even further with tax cuts and loosening of regulations on imports.

One of the biggest beneficiaries could be Lee Kyoung-soo, chief executive officer of Cosmax, a relatively unsung player in the industry. Cosmax is an Original Development Manufacturer (ODM), a subcontractor responsible for developing new products for big brands. In fact, Cosmax is the world’s top cosmetics ODM with sales last year of 800 billion won ($686 million). It supplies 600 brands around the world, including L’Oreal, Lancome and local giant Amore Pacific.

Last month, the Chinese government repealed a 30 percent luxury tax on cosmetics and perfumes to “boost the domestic cosmetics market,” explained Lee. “We have also received reports on the government’s plans to change the regulations on imported cosmetics.”

As more than 90 percent of goods produced within the Chinese factories are supplied to local Chinese brands, the expected increase in cosmetics consumption also forecasts a good spell for Cosmax China. 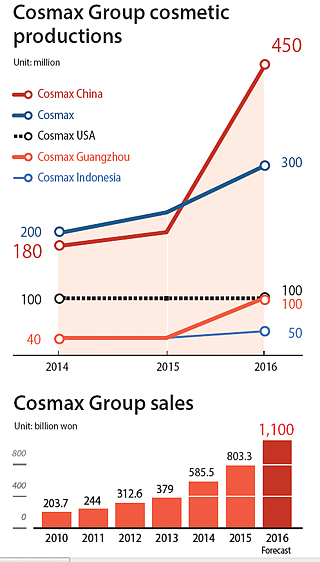 “Another opportunity has opened for K-beauty to take a leap in the Chinese market,” said Lee.

Cosmax is also the first Korean cosmetics company to obtain management rights of a domestic section within the Chinese e-commerce website, Tmall, run by Alibaba. Because up to 70 percent of 32 trillion won’s worth of all online transactions are made through the website, it will prove a great chance for the 600 cosmetics companies working with Cosmax.

In 2004, Lee headed to Shanghai to explore the Chinese market. Other cosmetics makers were dubious. Cosmax’s sales were only 30 billion won at the time. “The Chinese market was growing, and so will Chinese women’s demand for quality cosmetic products,” Lee said.

Five years after his leap into the Chinese market, the Hallyu, or Korean wave of cultural content such as K-pop bands and television dramas, took off across Asia. Hallyu led to K-beauty, a shorthand term for the popularity of Korean beauty products: Asian consumers wanted to look like their favorite K-pop or television or movie stars.

Sales in China are now an average of 30 percent of the company’s total sales. Aside from supplying Korean and other international brands, Cosmax also supplies base products to many Chinese cosmetics companies as its customers.

The company will augment its factory lines in Shanghai by the end of this year to double production quantity. “Because most K-beauty products are bought by Chinese tourists in Korea,” said Lee, “K-beauty’s sales are safe from danger unless the Chinese government decides to stop all the Chinese people from visiting Korea.”

Lee was 47 years old when his brother-in-law loaned him money to “start working for yourself instead of others.” He founded Miroto Korea in 1992 with three others in a small office in Poi-dong, southern Seoul. He had retired from an executive position at Daewoong Pharmaceutical. In 1994, the company changed its name to Cosmax. It now has nine factories and 5,000 employees.

In 2003, Lee bumped into the head of L’Oreal’s production management team at a Hong Kong cosmetics exposition. The yen was so expensive that production costs in Japan were 30 percent higher than in Korea. L’Oreal was looking for a partner in a different country, and Lee persuaded the company to let Cosmax supply facial powders.

“The opportunity came at an unexpected time,” he recalls. “But because we managed to prove ourselves trustworthy with our products, L’Oreal calls us a fantastic partner.”

When asked what he thought made Korean products competitive on the global market, the president answered, “Our innovative products come from the Korean ppali ppali [quickly quickly] mentality. There are downsides to that, I admit, but the benefits are much bigger.” Lee believes the almost immediate responses made by Korean companies are a key to their success.

“Nothing sells a cosmetic product more than a beautiful woman,” Lee said, and Korea’s women are the company’s greatest assets - especially those in the performing arts. He emphasized the importance of the cultural background in which the products are made by comparing countries.

“The biggest cosmetics market is in the United States, but you don’t see people buying made in the U.S. products over made in France goods. A cosmetic brand’s growth is proof of not only of its quality but also its cultural superiority.”

Cosmax celebrates its 24th anniversary this year, and the company is seeking to build a new corporate image. “I found that a company’s image is very important in the global market, even if we’re just a supplier,” explained Lee.

For his next target, the CEO is aiming at the U.S. and Indonesian markets; one, the biggest in the world, and the other, a fast-growing one. The company obtained approval from the U.S. Food and Drug Administration on both cosmetics and over-the-counter drugs in January in preparation for the big leap.