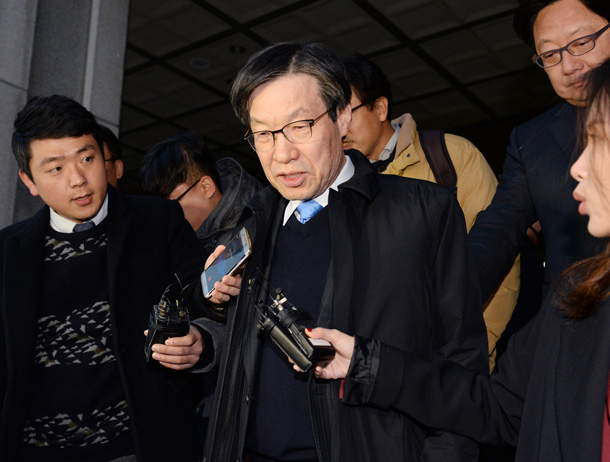 Kwon Oh-joon, CEO of steelmaker Posco, is surrounded by reporters on Saturday as he leaves Seoul Central District Prosecutors’ Office in Seocho District, southern Seoul, after he was questioned since Friday evening over the Choi Soon-sil scandal. He was the first of a string of chaebol figures who were summoned by prosecutors over the weekend to be questioned. [NEWSIS]

Several chief executives of Korea’s largest conglomerates appeared at the prosecutors’ office over the weekend to answer questions about their involvement in funding two foundations linked to President Park Geun-hye’s friend, Choi Soon-sil.

They all were summoned as witnesses.

Prosecutors said they mainly questioned the tycoons over how they came to give extravagant funds to the foundations and what role An Chong-bum, former senior presidential secretary for policy coordination, played in the process.

The two foundations, Mi-R and K-Sports, collected 77.4 billion won ($67.1 million) from 53 conglomerates just days after their launch and are thought to have been created by Choi as slush funds for Park’s use after she leaves office in February 2018.

An, who is currently detained, is accused of collaborating with Choi to strong-arm the conglomerates into donating.

An exclusive meeting at the Blue House on July 24 between President Park and 17 chaebols, most of which were already summoned or are planned to be, is suspected to have served as the key discussion ground for the funds.

President Park reportedly took until the following day to talk with seven of them individually.

If prosecutors manage to prove that the business moguls requested favors from the Blue House during the session, and that the presidential office accepted them in exchange for the funds, it could mean President Park committed bribery.

Aside from the funds, prosecutors also said they would ask Hanjin Group Chairman Cho Yang-ho whether he was pressured by the Blue House to grant a major construction project in the 2018 Olympic & Paralympic Winter Games to a Swiss company owned by Choi, and whether he was dismissed from his post as president and CEO of the PyeongChang Organizing Committee for refusing to do so.

Cho, who resigned in early May, said in a statement issued by his company that he was leaving the job in order to deal with “urgent issues” Hanjin Group was facing, namely the Hanjin Shipping crisis.

The string of questioning began last Friday when Kwon Oh-joon, CEO of Posco, was the first business tycoon to be questioned by prosecutors in the Choi-gate scandal over suspicions he allowed Choi’s aide to use his connections to the president to forcibly take over shares of a former advertisement affiliate of Posco.