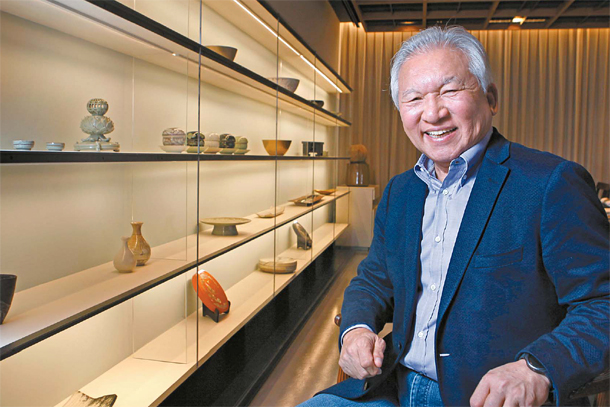 With the arrival of Michelin Guide’s Seoul edition last week, no restaurateur or hotel had more than one of their restaurants given stars, except for Kwangjuyo Group, the porcelain and liquor maker.

Having one of the two three-Michelin-starred restaurants in the city came from the hard work of the CEO over the past 28 years. He hosted a Korean food dinner in Napa Valley with big name locals in 2007, and has regularly hosted home-cooked dinners served on his tableware at his home since 1997. He wants to show that hansik, or Korean food, has enough power to be one of the driving forces for the domestic economy.

“It felt like I had been drilling a tunnel without knowing where the way out is for the past 28 years,” said Cho Tae-kwon, CEO of Kwangjuyo, “And the moment I heard the news, it felt like something just popped in the tunnel and a beam of a light came into my eyes.”

Cho, who inherited the family’s porcelain company after the passing of his father about three decades ago, saw the necessity to diversify the company’s portfolio which used to make luxury items used to drink Japanese style tea. He started his research on which market he needed to target and saw a lack of development in luxury porcelain being used as dishware. He wanted to get his hands on items that could make good sales, said Cho, during an interview with the Korea JoongAng Daily last week.

“Where you can really feel a country’s culture is in restaurants,” said Cho, adding that we see artwork on the wall, listen to music widely enjoyed by locals, and enjoy food and drinks made with locally grown ingredients.

He realized that Korea was missing a widely known luxury dishware brand, high-quality liquors, and talented chefs. So, he decided to do it all himself.

The agenda for the 28-year-long journey to build high-end restaurants in Korea was set then: Making something that can be a crucial part of the local economy. His attempt to make that happen continues as he plans to use the high-quality skills, manpower and networks from these rather expensive fine dining restaurants (Gaon only serves course menus, which start at 180,000 won, about $150) into more affordable ones, such as opening a bar attached to Gaon where one can have a quick bite and drink at a much lower price of around 30,000 won. He also wants to make a franchise restaurant chain in the future.

The following are edited excerpts of an interview with the CEO. 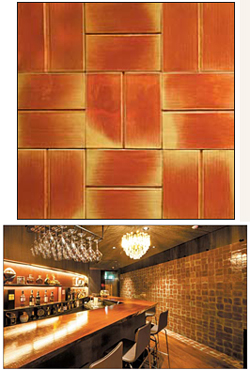 The new bar made in a corner of Gaon. The red wall is made with porcelain tiles, seen above, that are made with similar techniques as the restaurant’s dishware. [PARK SANG-MOON]

Q. Have you dreamt about being a food industry mogul?

A. Do you think I did this because I was so adamant about making porcelain and Korean food big? No way. The first instinct I had as a businessman was that I saw the economic feasibility. I didn’t start this 28-year run just because I had passion for this industry. I saw a chance of making an industry here, and saw a chance make a new field of the economy which can benefit and feed the future generation. So the process is more like setting up a goal and putting effort to achieve that goal, and it takes much more than just being persistent. I saw the economic feasibility and that’s what has driven me to come here.

How much influence do you think the Michelin Guide will impose on the culinary scene in Korea in your opinion?

The culture ultimately gets to be shaped by the country’s people. It is not made by some authorities from other countries. However, at the moment, we seem to have difficulties defining what makes the local culture, and not trust each individual’s definition of the Korean food culture. I think it is opportune time for a globally renowned institution to step in and maybe take a temporary lead. But what the Michelin can do is to just suggest its global view on a cuisine and then local chefs and industry people will either agree or rebel and be inspired to think that they can do better than what Michelin says.

How is that going to change the Korean culinary community?

Korean people are very creative and don’t want to be behind others. That’s something unique about the character often seen among Koreans. Once someone takes the lead and shows an unpaved path, the crowd follows and continuously brings out something new and updated. So I think the arrival of the Michelin Guide will work in our favor. We might not be so good at finding the direction, but once we do have one, the crowd comes - just like how Korea has so many post-Pak Se-ri kids after the golfer won major global competitions and achieved fame and wealth.

The group specially makes porcelain lines for renowned chefs such as Thomas Keller of The French Laundry in California, bottom, and Corey Lee of Benu, also in California, top. Middle: One of the best selling porcelain cups for alcoholic beverages has a small ball inside of it so that one can shake the cup after they are done to let others know that the cup is empty. [KWANGJUYO]

Does this mean that only high-end Korean food is the way to go? Will you open more affordable restaurants in the future to appeal to the general public?

I plan to open a franchise restaurant. I will leave half the margin other restaurants take from alcoholic beverages and sell more drinks by the glass. The restaurant will let people enjoy their meal for about 30,000 to 35,000 won total.

Would you share any skills and knowledge you have accumulated from running your two restaurants?

One idea I have is this. There are cultural centers in each district and there are about 228 of those centers across the country. I’m currently the general director for the one in Seongbuk District, and the plan I have is to make a restaurant within the district with chefs, architects and many more who can donate their talents. Make that venue as a cultural complex where some people can come eat food and listen to music. Chefs sit together and come up with recipes, and share those with other aspiring restaurant owners who want to open something within the district.

When the center actually starts to make money from doing these projects, then we invest it back to give it back to the community. Each center will be able to come up with something that doesn’t exist in other districts or regions to gain competitiveness and then we can discover more talent in the cultural fields. Those will contribute in shaping what we can call the Korean culture and we can bring that to the world and present it as something of ours.

How can we make the food scene more economically profitable in Korea?

We have to invest more in farms I think. This isn’t something I can get my hands onto, as I’m already involved with so many different things. What I can do is reveal the sources of vegetables and ingredients I use at the restaurants so that these farms can get more traction for more businesses. Just like Michelin has put [Gaon and Bicena] on the map in the culinary world, I can do the same for these farms. Then we can really talk about upgrading the quality of ingredients and have them be widely exported to other countries. We need to then make the locals appreciate luxury ingredients and eat more of them to make a domestic market for it so that those farms can have a sturdy base to push for bringing their products globally.

Kwangjuyo’s food may have just been discovered by the global community but its dishware has already been valued in the culinary world. What was the secret behind Kwangjuyo spreading its name among globally renowned chefs like Thomas Keller?

Back in the day, food itself didn’t look so fancy. So to compensate, the plates became very flamboyant with patterns painted by hands. That helped the overall presentation of food. Now, the food presentation itself has become fancier. So if the plates are too flamboyant, they kill the food and presentation all together. What became more important is moderation of the garment. So we decided to do matte white porcelain to make the food stand out more. With Thomas Keller using our dishware, many chefs who have worked with him started to use ours as well.

What’s the economic feasibility of the food scene now? Does it still have the potential it did when you started 28 years ago?

What can make us viable in the future all relies on food. We need to make an economy of scale here with Korean food. We need to continue diversifying recipes and dishes served at Korean restaurants in Korea and overseas, so that we can attract returning guests to restaurants. That’s the economic feasibility I see, and when I think my staff are ready, there is also a chance of Kwangjuyo opening a restaurant overseas.