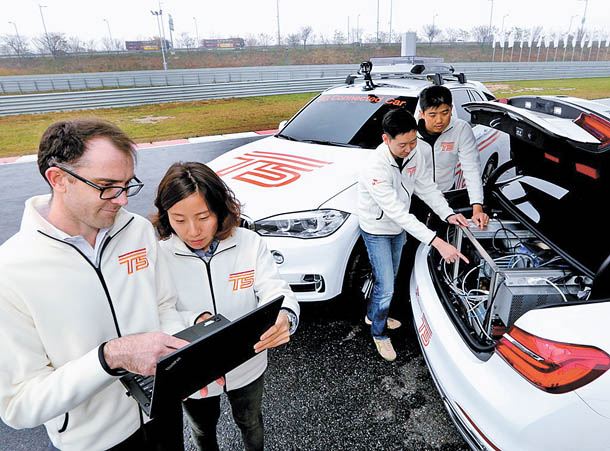 SK Telecom and BMW Korea demonstrate an experimental connected car, the T5, at the BMW Driving Center on Yeongjong Island in Incheon on Tuesday. [BMW KOREA]

INCHEON - When professional racers hopped in the T5 on Tuesday to test-drive the so-called connected car being developed by SK Telecom and BMW Korea at the automaker’s driving center in Incheon, they were surprised when the vehicle began maneuvering around the track’s obstacles by itself.

The two cars being tested were installed with fifth-generation, or 5G, network antennas that allow the cars to share data with surrounding devices such as traffic lights, CCTV cameras, drones and even adjacent vehicles. When the car running in front spotted an accident up ahead, it immediately notified the car behind it with a pop-up notice on its display.

“The car notified me of accidents and even sharp curves and slopes on the road that were previously hard to spot with my eyes,” rapper-turned-racer Kim Jin-pyo said after the demonstration.

The T5 is an experimental car jointly developed by the country’s top telecommunications operator and BMW Korea. The automaker equipped its new X5 and 7 sport utility vehicles with SK Telecom’s 5G networking device that can communicate with base stations on the ground.

For the test drive, SK Telecom set up a 5G network covering the 240,000-square-meter (26,000-square-foot) driving center in partnership with equipment maker Ericsson. It was the first time a so-called connected car based on a 5G mobile network was demonstrated in public, SK Telecom said in a statement.

Connected cars require fast internet connection to process large amounts of data and offer drivers useful information in real time, which means reliable and fast mobile networks are crucial. While 5G has not been commercialized yet, global telecommunication companies are scrambling to establish a faster and more stable network that allows connection to different devices and hoping to make their technologies the international standard.

“Data transmission about 10 times faster than the current 4G network gives a new eye to our vehicles through rapid data analysis,” said Alex Jinsung Choi, chief technology officer and head of the Corporate R&D Center at SK Telecom. “Cars will no more be a means of transportation but become a new living space.”

SK Telecom is the country’s first mobile carrier to team up with a global automaker and actually test a 5G-based car. It also recently became the first Korean company to join a global association founded in September that addresses key technical and regulatory issues related to 5G-based connected cars. The 5G Automotive Association comprises 12 companies, including automakers BMW, Mercedes-Benz and Audi and telecom companies Ericsson, Huawei and Qualcomm. The consortium is expected to help develop an international standard for 5G when it is commercialized.

Not to be outdone, the country’s two other carriers, KT and LG U+, are also making moves in connected cars.

KT last month teamed up with the province of Gyeonggi and the Ministry of Land, Infrastructure and Transport to establish a demonstration site for autonomous driving. The project’s core goal is to let a self-driving car run on roads in Pangyo by the end of next year. KT will establish a 5G network to help vehicles receive traffic and map data from a central command center.

LG U+ is cooperating with Mahindra Group’s local auto subsidiary, SsangYong Motor, and IT company Tech Mahindra to co-develop a connected car based on the already established long-term evolution, or LTE, network within three years. SsangYong will build interior systems for the car while Tech Mahindra will develop a telematics platform related to security, safety and remote control of the car.