Seoul starts its pivot to Trump

Seoul starts its pivot to Trump 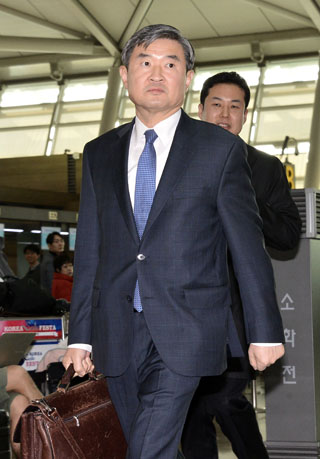 Cho Tae-yong, deputy chief of the National Security Office, arrives at Incheon International Airport on Wednesday to fly to the United States.[NEWSIS]

The Korean government sent a delegation of high-level officials to Washington Wednesday to meet with U.S. President-elect Donald J. Trump’s transition team in an effort to convey Korea’s position on the economy and security issues, including Pyongyang’s provocations.

Cho Tae-yong, deputy chief of the National Security Office, will head the delegation, which will comprise senior diplomatic, defense and trade officials who will meet with key members of the Trump transition team through Saturday and discuss important policy issues, said the Blue House Tuesday.

President-elect Trump last Thursday pledged his commitment to the Korea-U.S. alliance in a brief telephone call with President Park Geun-hye, allaying some concerns over what a Trump presidency means for security and economic relations between the two allied nations, including the future of U.S. troops in Korea, Washington’s nuclear umbrella over the South and the bilateral free trade agreement.

The Korean delegation is expected to make contact with key figures who will take part in the new Trump administration to reconfirm the nations’ bilateral alliance and establish an understanding with regard to North Korea’s nuclear and missile threats and the Park administration’s desire to push ahead with a UN Security Council sanctions resolution through cooperation between Seoul and Washington.

The Blue House added that they will discuss ways to improve economic cooperation.

The visit comes as Trump is reshaping his transition team.

A group of bipartisan Korean lawmakers also kicked off a visit to the United States Monday to meet with American lawmakers and experts linked with Trump to build links to the new administration. Rep. Chung Dong-young, a four-term lawmaker of the opposition People’s Party, led the delegation, which also included Saenuri’s Choung Byoung-gug and Na Kyung-won, Minjoo’s Kim Boo-kyum and the People’s Party’s Cho Bae-sook.

The group held discussions in New York on Monday with experts who have close relations to Trump, including Richard Haas, president of the Council on Foreign Relations.

In Washington on Tuesday, the Korean lawmakers met with Edwin Feulner, the former president of the Heritage Foundation, a conservative think tank, who is a member of the Trump transition team and who has maintained strong ties with Korea over the decades.