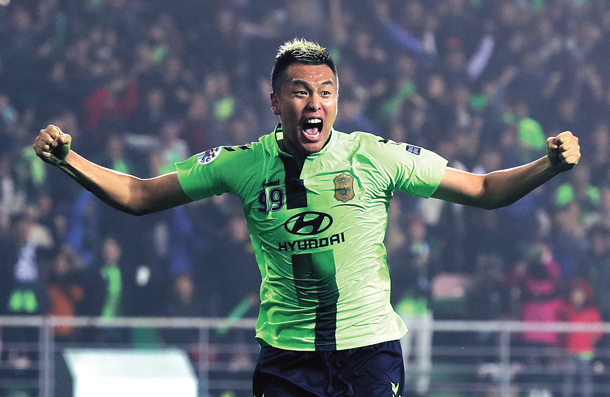 Kim Shin-wook of Jeonbuk Hyundai Motors roars after earning a penalty kick against Al Ain FC of the United Arab Emirates in the first match of this year’s ACL finals. Jeonbuk took down Al Ain 2-1 and now aims to bring home the ACL trophy after the second match next Saturday. [YANG GWANG-SAM]

The first match of the ACL Finals was played at Jeonbuk’s home turf, Jeonju World Cup Stadium in Jeonju, North Jeolla. As anticipated, despite the brisk weather, the stadium was filled with over 36,000 fans decked out in Jeonbuk green.

Jeonbuk, the 2006 ACL winner, started out the match with national team striker Kim Shin-wook as the target man. Mobilizing Choi Chul-soon, normally a full back, as a defensive midfielder, Jeonbuk’s skipper, Choi Kang-hee, planned to shut down Al Ain’s Omar Abdulrahman, once selected as one of the top Asian players by ESPN FC.

While Jeonbuk struggled to put anything on the scoreboard, the Emirati club took the lead for themselves.

Going scoreless at the interval, Al Ain’s Colombian winger, Danilo Asprilla, broke the deadlock just after the 60th minute. Abdulrahman threw off Jeonbuk’s defenders and penetrated the field to send in a cross, which found the Colombian inside. The 27-year-old winger then crashed it with a volley to find the back of the net and give the lead to the visitors.

The Korean skipper had to shuffle the cards on the table, pulling out Kim Bo-kyung, a defensive midfielder, and putting in Lee Dong-gook, a striker. With two forwards up top, Choi shifted the formation to 4-4-2. Putting in Lee up front with Kim Shin-wook was a brilliant move, as the two combined their efforts and contributed to the goals that Jeonbuk’s Brazilian midfielder Leonardo Rodrigues Pereira scored.

Stepping on the pitch in the 64th minute, Lee found Leonardo six minutes later, who received the pass from the Korean veteran forward to strike the midranger and equalize the match.

The heat of the game reached its climax, with fans going wild in the stadium, when Lee saw Kim Shin-wook inside the box and sent in a cross from the left. While fighting for the ball, Mohnad Salem fouled the Korean target man, which gave Jeonbuk a spot kick and a chance to break the tie and lead the game.

Leonardo stepped in as kicker and his shot found the right side of the net. The match, now 2-1 with Jeonbuk in the lead, concluded without further drama, giving Jeonbuk the victory from the first game.

Even after the win, however, Jeonbuk’s side said they will not let their guards down in the next match. “We are in a good position after the win,” said Choi, “but still have 90 more minutes to play.”

Although Jeonbuk is leading the series 2-1, they cannot be complacent going into the next game. The ACL finals are played in a two-legged format and the aggregate score of the series determines the winner, with away goals given more points in case of a tie.

Jeonbuk players shared their skipper’s sentiment. “We are in an advantageous position but we shouldn’t look at it that way,” said Lee. “It’s likely that they are going to rush things in the next game and we have to exploit this.”

But Al Ain will not let Jeonbuk easily take home the trophy. Lee Myung-joo, a Korean midfielder for Al Ain who fought hard against his countrymen on Saturday, said, “We can win the series just by taking the next game 1-0. We are still positive about this.”

The second leg will be played next Saturday at the Hazza bin Zayed Stadium in Al Ain, Abu Dhabi, UAE. Jeonbuk will bring home their first ACL trophy since 2006 if they end the match next Saturday with a win or draw.