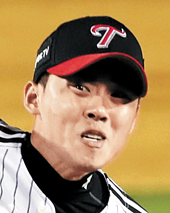 At the age of 25, Lim Jung-woo, a right-handed relief pitcher for the LG Twins, is the youngest player in the Korean national baseball team to play for the World Baseball Classic (WBC).

Korea, ranked third in the world according to the latest World Baseball Softball Confederation (WBSC) rankings, right after Japan and the United States, announced seven new faces when the final roster was announced on Nov. 10.

With no right-handed starters, the national team manager, Kim In-sik, and the coaching staff sought to beef up the bull pen with a few northpaw pitchers, so they brought on veterans like Lim Chang-yong of the KIA Tigers, Lee Hyun-seung of the Doosan Bears, Won Jong-hyun of the NC Dinos and Chang Si-hwan of the KT Wiz. Lim was called up for the same reason.

Taking up the closing assignment for the first time this season, Lim nabbed 28 saves to finish the regular season second in the category after Kim Se-hyun of the Nexen Heroes, who collected 36. Although Lim is known for his lethal fastballs, he’s also one of the select few in the league with unpredictable curveballs.

Lim struggled early in the season when he was given the closing job for the first time as he was adjusting to his new role. His poor form hit rock bottom in June when he posted five losses and only three saves, with his earned run average (ERA) for the month standing at 12.10.

But the pitcher started to turn it around in July, when he put up three saves and only one loss while recording 2.79 ERA. His last game of the season came on Oct. 6 against the Lotte Giants. Lim pitched in one and 2/3 innings as the closer and tallied a save, striking out four hitters without conceding a run. This was a clear sign that manager Yang Sang-moon’s initiative this season to make a generational shift in his club is finally working out. Lim tossed in three postseason games, carding two wins, two saves and one loss.

While the numbers from this year look impressive, Lim’s debut on the national team is especially good news for the Twins, who could make sue of the depth of experience Lim will gain through the WBC.

“I hoped to make it into the national team roster but I didn’t think it would actually happen,” Lim said. “There are so many good pitchers in the league and just to be included in the provisional roster was an honor for me. I got text messages saying ‘congratulations,’ but I didn’t know what they were about until I read the news.”

As unexpected as it might be, donning the national team jersey was something on Lim’s agenda for the year. “This was the last goal of the season that I wanted to achieve,” Lim said. “I posted over 20 saves and I experienced the postseason. I thought if I could make it onto the WBC final roster, I would have achieved everything I wanted to this year.”

“This is such a big stage and I cannot express how lucky I am,” Lim went on.

Without a doubt, Lim spent a productive season, more so than any pitcher could ask for. Skeptics may have initially doubted whether he had enough experience to take the closing assignment, but he’s more than proven a perfect fit for the job.

Lim only racked up eight losses this season, not a bad number for a closer, especially given that five came in June while he was trying to find his footing as the closing pitcher under Yang.

At the moment, Lim is taking some time to rest his shoulder in preparation for next year.

“My ball control started to waver towards the end of the season,” Lim said. “I will be good to go again after a break, but I am going to use this winter to get ready for the WBC as well as for the next season.”