Whose side are you on?

Whose side are you on? 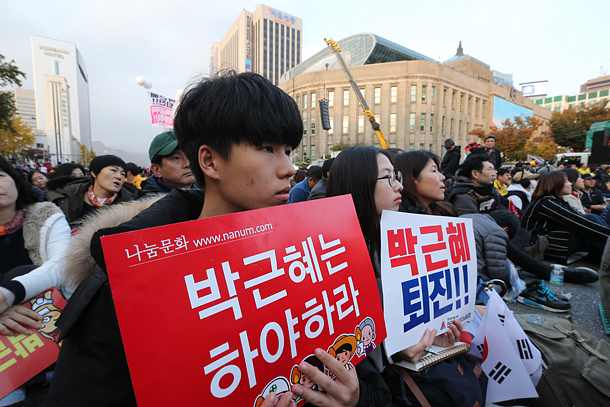 Students participate in a protest rally near City Hall in central Seoul on Nov. 12 to demand President Park Geun-hye step down. [SHIN IN-SEOP]

In the end, she wants to go all the way. President Park Geun-hye, now a criminal suspect, has made it clear that she will trample on the prosecution’s investigation. After having used the prosecution’s power so frequently over the last four years, she is now criticizing the findings by senior prosecutors — whom she herself had appointed — simply as “groundless.” As she made vice-ministerial appointments last week, she sent a clear message: “I have authority over personnel affairs, so you’d better side with me.”

If we had hoped Park would come to her senses, we had been asking for too much. She does not know how a president should act, so blaming her for being unpresidential is meaningless. The reasons why she must step down are stated in the constitution. Clause 2 of Article 1 states that “the sovereignty of the Republic of Korea resides in the people, and all state authority comes from the people.” Clause 1 of Article 7 states that “all public officials are servants of the people and responsible to them.” So when the people demand her resignation, she must step down.

Does the president think that only 1 million out of 50 million people participated in the protests? A Real Meter poll on Nov. 17 found that 74 percent of respondents want her resignation. “The citizens protesting on the streets are advocates of the will of the people,” said Kim Jong-dae, a former justice in the Constitutional Court. “Their calls are the order of the sovereignty holder. It does not make sense that the president — a servant — go against the order and confront the owners of sovereignty.”

History is the witness. During the resignation of our first president, Syngman Rhee, as a result of the April 19 Revolution in 1960, ministers and National Assembly members played certain roles. On the morning of April 26, Foreign Minister Huh Jung and Defense Minister Kim Jung-yul pressed Rhee to step down. Song Yo-chan, who had declared martial law, arranged a meeting between Rhee and representatives of citizens and students. Rhee reluctantly announced a statement of resignation “if the people want.”

By the afternoon, the ruling and opposition parties had passed a resolution confirming Rhee’s departure and announced a by-election as well as a constitutional revision toward a parliamentary system. The following day, Rhee submitted a letter of resignation to the National Assembly.

The most important duty of presidential advisers is to inform her of when to exit. If Park has anyone around her, they must tell her straight. Cho Won-dong, Ahn Chong-bum, Woo Byung-woo and Jeong Ho-seong have turned the Blue House into a private club for personal interests and protection.

There was only one person who had worked sincerely: the late Kim Young-han, a former senior presidential secretary for
civil affairs. He fulfilled his last duty to the people with a notebook where he had written down orders from Chief of Staff Kim Ki-choon and the National Intelligence Service’s report on the Sewol Ferry incident.

Kim Ki-choon then pushed Kim Young-han out by labeling him incompetent and disobedient, and now, Kim Ki-choon is also to be investigated by the prosecution.

Followers of the Blue House should feel troubled. I believe some of the Blue House staff, political officials and pro-Park lawmakers are also concerned. When their children ask, “What will you do, father?” they must not hesitate. They must think about what they have lived for, and what they will live for, and make up their minds. They must say to the president, “You must give up. I cannot be on your side any more. I am serving the people.” They must give up their positions and possessions. They must confess their faults that contributed to the worst scandal in the history of our democracy, whether their involvement was big or small.

It may be painful for them to part with their past and the people they had been associated with. But it is a necessary process to serve our sovereignty, defend the pride of public servants and, most of all, as a citizen of the country.

As the autumn leaves fall, young people hold up candles and ask, “Whose side are you on? Are you with the people or with Park Geun-hye?”