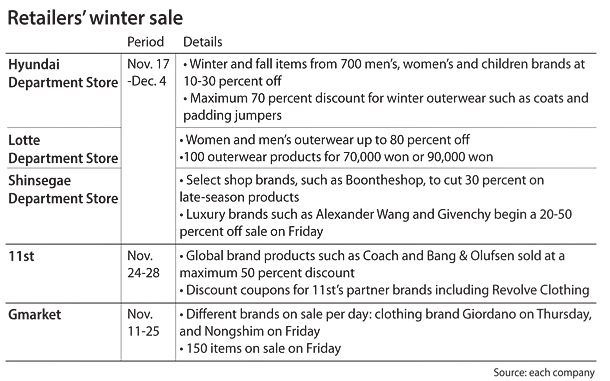 Before this week’s Black Friday in the United States, local department stores and e-commerce sites are launching winter sales of their own to try to draw in consumers for the year’s last discounts.

The nation’s big three department stores - Lotte, Hyundai and Shinsegae - all started winter sales on Thursday, which will run through Dec. 4.

Traditionally December has been the month that has pulled in the most revenue. However, as global consumers became familiar with national discount periods such as China’s Singles’ Day and Black Friday in the United States, they began opening their wallets more in November.

Lotte Department Store’s most profitable month last year was November. “There were multiple contributors: the national sale, our anniversary sale etc., but we definitely see the effect global sale periods such as Black Friday and Singles’ Day have caused to boost consumer sentiment during this time of year,” said a Lotte spokesman.

The common strategy of department stores this year is to expand their winter outerwear collections. Although they were always among the traditional list of products for winter sale, this year’s outerwear inventory left over from last winter is particularly large, the weather having reached a 40-year high last year. Luckily for department stores, this year’s winter is foreseen to return to its usual coldness.

Hyundai Department Store is selling a limited supply of winter outerwear of up to 70 percent off. Other clothes and products for the fall and winter will be sold from 10 percent to 30 percent off during the entire sale, which includes 700 brands.

Lotte Department Store also enlarged their lineup of outerwear during its last annual sale, setting an all-time high record by putting one million units on sale, worth 150 billion won ($127.8 million). Throughout the sale period, Lotte will sell more than 100 outerwear items for 70,000 won or 90,000 won from brands including the outdoor brand Kapa and sportswear brand Prospecs.

Shinsegae Department Store’s select outerwear will be sold for less than 100,000 won. For example, the brand Plastic Island’s long coat, which usually goes for more than 150,000 won, is on sale for 79,000 won. The company’s shops, including its most popular, Boontheshop, are offering late season products for 30 percent discount. Likewise, luxury brands such as Moschino and Vivian Westwood have already started late season discounts by 20 to 50 percent.

Koreans’ interest in Black Friday grew alongside the rise of buyers who purchase directly from overseas shops online. Around this time of year, online communities of such direct shoppers are armed with information and tips on tax issues, currency exchange rates, discounts and delivery charges.

As orders may soar on Friday and Cyber Monday, shoppers should prepare in advance, including registering their credit cards on the e-commerce site and placing items on a shopping list. Receiving a Unipass code from the customs office is also crucial, as without it, customers cannot purchase products from overseas websites.

During the last few years, local e-commerce shops have profited from the increased number of online shoppers during the season.

“The advantage of Korean e-commerce sites [on selling discounted global brand products] is that the whole procedure is presented in Korean and that local consumers are more familiar with the payment and delivery systems,” said spokesman for 11st, an e-commerce site.

Last year, the company saw a 48 percent increase year on year in sales of global brands during the two weeks around Black Friday. In 2014, the company’s growth rate was 97 percent while in 2013, it was 54 percent.

This year, 11st will sell more than 100 global brands at a maximum discount of 50 percent until Monday. Apart from fashion brands like Coach and Louis Vuitton, electronics brands such as audio manufacturer Bang & Olufsen will be included.

Gmarket’s sale, scheduled to end Friday, will include domestic brands such as LG Electronics and Hana Tour. Unlike other companies that simultaneously present a fixed array of products for a certain period, Gmarket’s strategy is to diversity the items and brands on sale each day. For example, shoe brand New Balance put its products on sale for 24 hours last Monday.