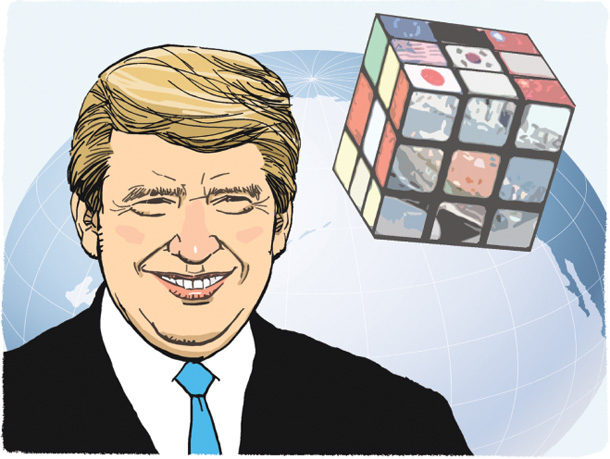 The victory of Donald J. Trump in the U.S. presidential election is stunning in many ways. For the first time in nearly three decades, the president and majority of the both the Senate and the House of Representatives are from a single party.

What used to be the stronghold for Democrats — the working population of the Rust Belt in the industrial Midwest — ended up playing a decisive role in making a candidate who had been scandalous and controversial throughout the campaign the next U.S. president.

Although delivering a landslide victory for the Republicans, a president that even the party leaders have distrusted and yet elected entirely out of anger against the mainstream is not expected to get along well with the Republican legislature.

Despite his outlandish and even some outrageous platforms, Trump won the hearts of the white populace with his pledge to restore U.S. supremacy. On the economic front, he championed protectionist policy to prioritize defending U.S. jobs and industries. As a candidate, he threatened killer punitive tariffs against countries that have been accumulating fat surpluses in trade with the United States to return the U.S. trade account to black.

He has been most hostile against China, threatening to label it a currency manipulator and levy a 45 percent tariff on Chinese imports. He also called the U.S.-Korea Free Trade Agreement a bad deal that must be reconsidered in a way that is doesn’t undermine American jobs. He neglected the fact that the iconic technology company Apple gets most of its products made in China and Americans found millions of jobs through capital investment by Korean companies after the FTA.

The trade agenda that won him the presidency could undergo a trial run as soon as he takes office early next year. Tariff barriers could be imposed on the industries and exports that have hurt and weakened the competitiveness of the traditional industries in the Rust Belt to reward voters there. Trade pressures could mount on farm produces coming out from the voting bases of Republicans. His campaign to strengthen other currencies could pan out since currency issues arose on the campaign trail.

As forced appreciation in the local currency could be devastating for the trade-reliant economy, Korea must come up with a fundamental action plan. Since Seoul and Washington frequently clashed over trade issues on the World Trade Organization and bilateral FTA compliance, Korea could become a casualty in the early stage of the Trump administration. Korea Inc. must be extra careful in its overseas strategy.

The beginning of the Trump trade policy would be action on the Trans-Pacific Partnership (TPP), a signature deal of the Obama administration that encompasses free trade agreements among 12 countries representing more than 40 percent of the world’s gross domestic product. He has warned that the deal would move American jobs overseas and wreak havoc on the U.S. economy.

How he can persuade the other 11 members to change the agreement in favor of the U.S. could be the tipping point for his trade agenda.

The TPP was hard sought by the Obama administration to rein in the rise of the U.S. economy and made a rare agenda that won the endorsement from the Republican-dominating legislature.

What he proposes to constrain China after killing the most powerful trade weapon could set the tone for effectiveness in his policies. He would have to come up with an alternative to the U.S. roadmap of digitalizing commerce through services sector alliance through China-excluding TPP network.

The renunciation of TPP talks could be a relief for China and Korea and other non-inaugural members excluded from the new U.S.-led trade order. But it could be devastating for Japan, which reinforced an alliance with the Obama administration. The attempt to revive U.S. supremacy may not be easy. The U.S. predominance after weakening of multilateral global power following World War II only ended up breeding anti-American sentiment and fueling the rise of China. Washington could lose further influence around the globe if its security predominance weakens by making allies share a greater cost for defense alliance.

However the U.S. political circumstances develop, trade conditions will turn unfavorable for Korea. The state also may run for many years. The global market must grapple not only with Trump’s agenda, but also with a slowdown in the Chinese economy and Britain’s exit from the European Union. We must come up with both short and long-term survival plans.

The government must map out contingency plans for the worst scenario and form a joint public-private situation room so that it can act and respond quickly through negotiations or legal suits. Trade diplomacy team must be enforced to brace for tougher trade battles and challenges.

The industry must strengthen competitiveness in products so that they can survive in the markets regardless of protectionist trade actions. At the end of the day, technology would save a company in an international contest more than government help.
Translation by the Korea JoongAng Daily staff.


*The author is a professor at the Graduate School of International Studies at Seoul National University.