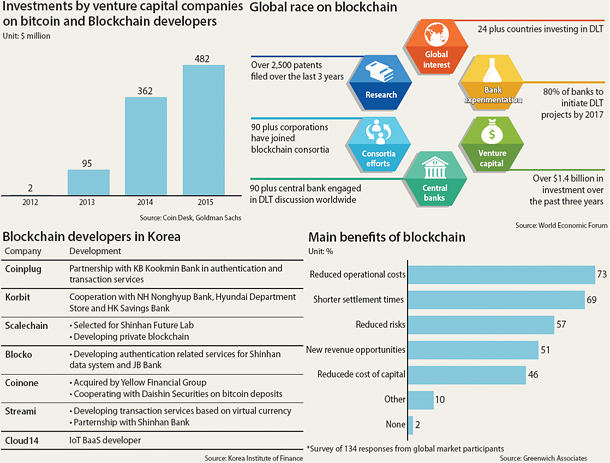 On Nov. 15, KEB Hana Bank became the first Korean bank to get close to using blockchain, or decentralized ledger technology, for customer authentication and payment service.

The bank said it tested and verified the use of the technology and is only a step away from implementing it for commercial use.

Once the technology is implemented, KEB Hana Bank’s customers won’t have to go through the security hoops so common in online banking in Korea. Also, commission charges will be drastically lowered. The blockchain-based service will dramatically lower costs for both banks and customers and also save time.

This is a big step for a bank that has been trying to be on the cutting edge of new technologies for financial services. KEB Hana Bank was the first to introduce mobile banking service in December 2009, just few weeks after the first smartphone was sold in Korea.

In April, KEB Hana Bank and Hana Financial Group were the first Korean institutions to join the global blockchain consortium R3CEV, which has over 50 global financial companies as members, including heavyweights like Citigroup, Bank of America Merrill Lynch, Morgan Stanley, Deutsche Bank and HSBC. Other leading Korean banks - Shinhan, KB Kookmin Bank and Woori - joined the consortium later. Even the state-run Industrial Bank of Korea (IBK) joined the consortium in August.

Members of the R3 consortium can either develop their own blockchain technology or participate in group development.

“KEB Hana Bank and Hana Financial Group have actively participated in the R3 project and are the only financial group [in Korea] to develop a [blockchain] prototype,” said Han Jun-seong, the group’s senior managing director. “We plan to use it as the springboard to expand into the global market with the development of a blockchain-based financial platform.”

If 2014 and 2015 were the years of fintech hype - signaling the rise of new technologies that will change the financial industry - this year has been marked by mania for blockchain technology, which is expected to revolutionize not only finance and trade but many other realms.

Blockchain was picked as one of the top 10 new technologies by the World Economic Forum in June, and major financial companies are rushing in.

“The discussion has expanded beyond the virtual currency Bitcoin and interest about the impact that blockchain will have is growing,” said Julie Han, a researcher at LG Economic Research Institute. “The convenience and cost efficiencies created through the credible transactions created by blockchain - where there are no interventions from a third-party moderator - will not only satisfy individuals and businesses that are involved but also the public sector.

“Experts that have had interest in innovative technologies are seeing blockchain bring about changes that are as big as the changes brought on by the internet.”

The LG institute’s researcher added that the nature of the changes that blockchain will bring about can be summarized as transaction approval and “democratization of information.”

“This means a safe and direct transaction is possible without having to go through a powerful third-party authentication agency or a moderator,” Han said.

Although blockchain derived from Bitcoin, the virtual currency is just one aspect of blockchain technology.

So what is blockchain?

Blockchain is a public database and a financial transaction is authenticated in an encrypted distributed ledger.

In other words, transaction data isn’t stored at a single central administrator but rather shared across in a network of multiple ledgers that are encrypted. It’s the same as shredding the pieces of a contract and handing each piece to a large group of people.

One of the biggest strengths of this system is that it provides greater transparency, and its security is so tight that the ledgers can’t be replicated or fabricated.

In the centralized security system, a hacker can replicate or fabricate data by hacking into a database stored on a server.

Such was the case of the security breach at three credit card companies - KB Card, Lotte Card and NH Card - that lead to the leak of 20 million subscribers’ personal information.

In February, hackers targeted Bangladesh’s central bank’s account in the New York Federal Reserve. Malware planted by hackers attempted to transfer $951 million to several fake bank accounts. While most of it was prevented from being transferred or recovered, $81 million that was sent to the Philippines was lost.

With the blockchain system, a hacker would have to hack into a great number of encrypted ledgers, which is nearly impossible.

Additionally since the security system is composed of a series of encrypted networks that don’t need a centralized server system, financial companies’ costs of building a security system are expected to be reduced.

In a report released in May, the Society for Worldwide Interbank Financial Telecommunication (Swift) estimated that roughly $40 billion would be saved annually in building security infrastructure if blockchain technology was adopted. With expenses for security, banks would be able to cut commissions charged to customers.

According to the World Economic Forum, more than 24 countries are investing in the development of blockchain technology while 90 companies have joined blockchain consortia. The world’s biggest consortium, R3, was formed in September 2015.

In the past three years, $1.4 billion of venture capital has been injected into development. It is predicted that by next year, 80 percent of banks are to initiate blockchain projects.

A CoinDesk study showed that venture capital investments in bitcoin and blockchain companies has surged in recent years. Between 2012 and 2015, venture capital funding on average grew 294 percent annually.

“Clients can trade gold bars without having to worry about losing their certification, as we were the first in the financial industry to commercially use blockchain, which is known for its innovative security technology,” said a Shinhan Bank official.

Shinhan Bank is also investing in a fintech start-up Streami, which is developing blockchain technology that will allow overseas transfers of the virtual currency Bitcoin.

Other major Korean banks and nonbanking financial groups are joining hands with start-ups to develop blockchain solutions for financial services.

Since February, KB Kookmin Bank and Coinplug have been developing a customer authentication and transfer service, while NH Nonghyup, Hyundai Department Store and HK Savings Bank are working with the country’s first won-based Bitcoin exchange operator, Korbit, on blockchain solutions.

The brokerage company Daishin Securities has been working with Coinone, which is under the Yeollow Financial Group, since June to develop stock trades using the digital currency Bitcoin.

“Since the financial authorities announced the lifting the regulations that requires the use of authentication certificates on electronic financial transactions including internet banking and internet shopping [in March] last year, credit card companies have had a strong interest in an alternative authentication system,” said a credit card industry official. “Interest in blockchain, where fabrication is impossible, has been rising sharply.”

Even IT developers such as Samsung are jumping on the bandwagon, as blockchain can be applied in other realms including the Internet-of-Things.

“Blockchain will have an immense influence not only on the financial industry but on other industries as well,” said Kim Eun-jin, an analyst at Shinyoung Securities. “It will be possible to trade anything whether it’s tangible or intangible assets that could be coded into a program.”

But as blockchain is relatively new and untested, debates on how it should be approached are still ongoing and no country has set rules yet.

“In order for blockchain technology to be applied to the banks’ electronic financial services, the existing electronic financial transaction law and oversight regulations that are based on a centralized database system will need to be changed,” said Kim Jong-han, a senior researcher at Woori Finance Research Institute.

Some analysts say that the Korean financial authority should be careful about new regulations and avoid rules that could hold back development of the technology.

“The existing system has a specific definition of financial institutions and participants,” said Lee Ji-eun, a senior researcher at Korea Institute of Finance. “Blockchain should be approached with the understanding that all information is shared,” Lee said.

In fact, in the case of the European Union parliament in June, the members voted in favor of a hands-off approach in regulating blockchain technology.

“To avoid stifling innovation, we favor precautionary monitoring rather than preemptive regulation,” said Jakob von Weizsacker, who drafted the resolution. “But IT innovations can spread very rapidly and become systemic. That’s why we call on the commission to establish a task force to actively monitor how the technology evolves and make timely proposals for specific regulation if, and when, the need arises.”

Some analysts say there is a need to create a law that would hold financial authorities, including central banks, accountable in case accidents happen in the course of financial transaction, including stock exchanges, using blockchain technology.

The Korean government is also taking notice of the new technology. On Thursday, the Financial Services Commission said it will launch a joint government and private sector blockchain consortium of 30 or so financial companies to research on the new technology. The consortium will officially launch next month starting with 16 banks joining on Wednesday and 20 brokerage firms by Dec. 7.

“With the launching of the consortium we will create momentum, and instead of passively following the lead of advanced economies, we will lead in the development of technology and services,” said Kim Yong-beom, the FSC’s secretary general.

The private sector is also holding events. The largest conference on blockchain in Asia is scheduled to take place at Kintex in Goyang, Gyeonggi, next month.

At the two-day Inside Fintech Conference and Expo, kicking off on Dec. 8, major leaders in the field will attend, including Tim Swanson, R3’s director of market research; Avril Parkin, Thomson Reuters client technology director; Simon Dickson, former head of the UK Crowd Funding Association and Jae Kwon of the U.S.-based blockchain start-up Tendermint.