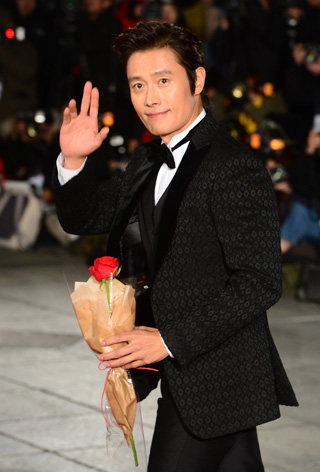 Held on Friday evening at Kyung Hee University, Lee was honored for his role in the political crime-thriller “Inside Men” (2015) and Kim for hers in the mystery-thriller “The Handmaiden” (2016).

“When I first read the scenario for [“Inside Men”], I thought it was too much of an exaggeration. However, I believe that reality now seems to have surpassed the movie,” Lee said, referring to the ongoing scandal revolving around the influence wielded by presidential friend Choi Soon-sil in the Park Geun-hye administration.

Actress Kim, who played a mysterious lesbian heiress in June’s hit, did not attend the ceremony. She has been refusing to make public appearance since a scandal erupted over her relationship with director Hong Sang-soo, who is 22 years her senior and also married with a child, following the release of “The Handmaiden.”

Instead, the producer of “The Handmaiden” Yoon Seok-chan received the award on her behalf and said, “Kim Min-hee worked harder than anyone else on the film from 2013 to last summer.

“Even though it wasn’t easy to act in a foreign language (Japanese), she overcame that difficulty and pulled off the role very well,” he said.

Considered one of Korea’s most influential awards, this year’s Blue Dragon Awards ceremony was moderated by actor Yu Jun-sang and actress Kim Hye-soo.