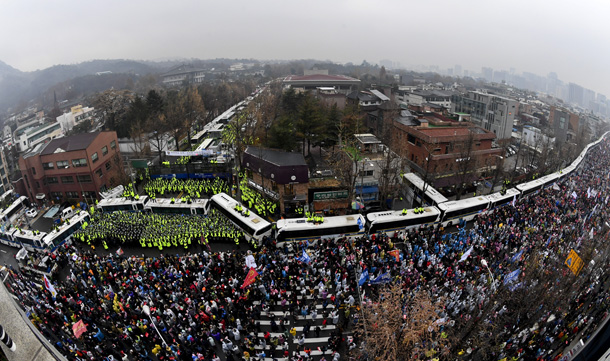 Protesters demand President Park Geun-hye resign in the wake of the Choi Soon-sil scandal during a candlelight vigil Saturday, the fifth of its kind, which drew 1.5 million people in Seoul and 400,000 elsewhere in the country. The protestors were allowed just 200 meters (650 feet) west of the Blue House, the closest the police had ever allowed. [LIM HYUN-DONG]

Braving winter cold and snow, an estimated 1.9 million people took to the streets nationwide Saturday calling once again for President Park Geun-hye to resign amid an ever-broadening abuse of power scandal.

Saturday’s rally was the fifth of its kind in which protesters demanded Park resign or be impeached for letting her longtime friend Choi Soon-sil pull strings from behind the scenes in state affairs, extort money from conglomerates and get hold of classified information - without any formal role in Park’s administration.

The rally organizers, an association of various civic, labor and legal groups, estimated the number of people on the streets of Gwanghwamun Square in downtown Seoul at 1.5 million, while the police put the figure substantially lower at 270,000.

An estimated 400,000 outside of Seoul took to the streets with candles in a rare show of political solidarity in a country usually marked by an acute ideological division between so-called liberals and conservatives.

But that solidarity is now becoming a weekly phenomenon.

As in the four previous Saturday rallies, people from all walks of life partook in a kind of political festival ranging from parents with children in strollers, middle and high school students in school uniforms, to a woman riding a cow she had brought to Seoul. They chanted “Park must resign” and held signs that read, “Out with Park Geun-hye.”

Reflecting an indictment of Choi filed last week in which prosecutors identified President Park as a co-conspirator in a number of schemes, people changed “Arrest Park Geun-hye!,” which wasn’t heard at previous rallies.

“I decided to be out on the streets with my two kids today because this is the country in which they have to live their lives,” Lee Jong-hwa, 47, told the Korea JoongAng Daily. “I want to give them a country that will be better than what we have had so far under the Park presidency.”

Lee, who came to the rally with his wife, 11-year-old son and 8-year-old daughter, said the so-called Choi-gate scandal was illustrative of the ethical backwardness of the political elite in the country.

“While the ethical standards of the general public have progressed in line with economic growth, in the political circle they have lagged far behind. Choi-gate has laid bare that backwardness,” he said.

Hankyoreh, a local newspaper, interviewed a woman riding a cow as she marched through the street with other protesters. When asked if she thought riding a cow in the middle of Seoul was dangerous, the woman replied “Keeping Park in power is much more dangerous,” according to the paper.

“It’s a fact that President Park tried to cover up her scandal and refuses to acknowledge her wrongdoing,” said Nam Jun-keol, who came to Gwanghwamun Square from Cheongju, North Chungcheong, with his wife.

“I want her out of office immediately,” said the 31-year-old.

Kwon Young-cheol, who came from Suwon, Gyeonggi, with his wife and 4 year-old son in a stroller, said he was most enraged about Park’s inaction in the hours after the ferry Sewol sank in waters off South Jeolla on the morning of April 16, 2014, a tragedy that eventually left 304 people dead.

“The governing party and the Blue House have not issued a single sincere apology for their incompetence on that day,” said Kwon.

For the fifth rally in the heart of Seoul, people deployed a variety of creative banners to denounce the Park administration.

In mockery of news reports this week that the presidential office had purchased 60 Viagra pills and over 300 pills of a generic equivalent, one person marched with a banner that read: “Korea’s Impotence in Alpine Zone Laboratory” under an image of a Viagra pill.

The line refers to the presidential office’s explanation that the pills were purchased to counteract altitude sickness for people accompanying the president on trips in May to Ethiopia, Kenya and Uganda.

Protesters were allowed to march to a point 200 meters (650 feet) west of the Blue House at around 4 p.m. Saturday, the closest the police had ever allowed. The line of people surrounding the Blue House west to east stretched 2 kilometers. At the rally’s peak, about 350,000 people encircled the presidential compound shouting for Park’s resignation.

Protesters were able to get so close to the presidential office after a local court gave permission between the hours of 1 p.m. and 5:30 p.m. After the 5:30 p.m. deadline set by the court, protesters withdrew from that front line and returned to Gwanghwamun Square to avoid confrontations with the police - a departure from street rallies in past years, which regularly turned violent.

The highlight of the Saturday rally came at 8 p.m., when a million people turned off their mobile phones and blew out candles to plunge the area into darkness for two minutes. The move was meant to signify “darkness brought upon to the country by the Park government,” according to the organizer.

Park’s approval rating reached an all-time low of 4 percent in the latest poll by Gallup Korea. The figure, the lowest for any Korean president, is down one percent from a week before. In another poll by the JoongAng Ilbo conducted on Monday and Tuesday, 75.5 percent of respondents said Park must resign voluntarily.

15.9 percent said she should be impeached.

Protesters stayed in the area until as late as 5 a.m. Sunday without major injuries or scuffles with the police. In Busan, the country’s second-largest city, about 80,000 took to the streets Saturday. The sixth rally is expected this Saturday.