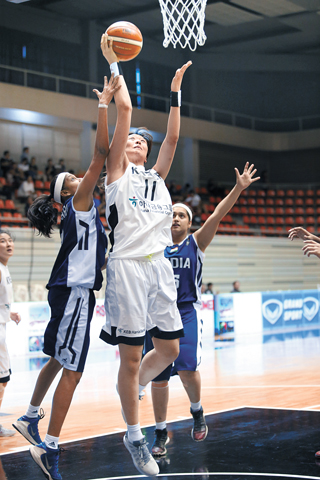 Korean national team center Park Ji-su, in white, goes for a layup during the U-18 match against India on Nov. 16. [KOREA BASKETBALL ASSOCIATION]

More than a month later, she has yet to play her first game with the team. Initially, it was her participation in the International Basketball Federation’s U-18 Asian Championship earlier this month that delayed her debut with the KB Stars. Now, it is a foot injury that she sustained during the tournament that is forcing her to stay on the bench.

If the KB Stars, currently ranked second in the league, want to stop Asan Woori Bank Wibee’s perfect record of nine wins, zero losses this season, they will need the young 18-year-old center to get in the game as soon as possible.

Back in October, when the head coach of the KB Stars, Ahn Duk-su, first learned his team would be given the No. 1 pick at this year’s rookie draft, he reportedly leapt out of his chair. “What a jackpot,” he said on the prospect of adding Park to his team’s roster.

After Park was called up by the national team to play in the U-18 Asian Championship, Ahn was more than willing to wait a month or so for her to be released from her national team duties. After all, the more experience Park could gain, the more prepared she would be for his team.

And Park did not disappoint. During the U-18 Asian Championship, she averaged 8.6 points, 10.6 rebounds and 1.9 assists. Korea eventually finished third in the tournament after China and Japan, and the national team selected Park as their MVP. Her performance was especially impressive during the semifinals match against Japan on Nov. 19, where she topped in the team in every notable category - points, rebounds and assists.

But her peak performance in the tournament came at the cost of her foot.

After the Nov. 19 match, Park felt pain at the top of her right foot and later discovered she had torn her ligament. Coach Ahn was left aghast, as he initially hoped to have Park make her grand debut with the KB Stars by Nov. 27.

To make matters worse, Park continued to play with the national team a day after she discovered her injury. It was apparent that Park was not in her best condition as she stepped off the court after just one minute. She ended up putting no points on the board and grabbed only one rebound.

After the tournament, there was criticism that the national team had overworked their young center. Similar allegations surfaced a few months ago when Korea was in the qualifiers for the Rio Olympics. Although Korea failed to advance to the Summer Games, Park, the squad’s youngest player at the time, averaged seven points and 10.8 rebounds for the team.

Park brushed off concerns about the situation. “When I was younger, it was difficult for me to spend so much time training with the national team, and I was unable to hang out with my friends,” she said. “But then my friends told me being on the national team was a rare honor. Now, I won’t be playing in the U-18 team anymore [as she turns 19 next week], so that’s less burden for me.”

Because of the foot injury, Park will have to wait until next month to don the KB Stars uniform. The team is set to face Woori Bank Wibee on Dec. 19, and Coach Ahn will want Park ready by then. The KB Stars, though, and Park herself are reluctant to rush her recovery.

“I will just take it slow and easy,” she said. “But even if I have missed some portion of the season, I will still aim for the Rookie of the Year title.”

While the Women’s Korean Basketball League’s star rookie remains in rehab, the men’s basketball league’s No. 1 draft pick, Lee Jong-hyun of the Ulsan Mobis Phoebus, has yet to see any playing time either.

Lee, a center, is also still recovering from a foot injury. “I can tell he’s anxious,” said Yoo Jae-hak, head coach of the Mobis Phoebus. “I told him to be patient and meanwhile, do whatever he can to get himself ready.”