Bracing for the worst

Bracing for the worst 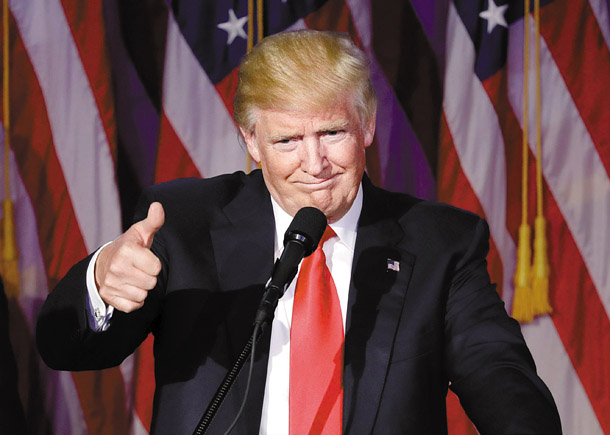 Bad things never come alone. The victory of Donald Trump in the U.S. presidential election added more volatility to a country saddled with an unprecedented political crisis, with the sitting president facing criminal investigations for the first time ever and state leadership virtually in limbo.

The U.S. president-elect’s slogan of “Anything But Obama” to overthrow the eight-year legacy and policies of President Barack Obama will bring about massive changes to the Korea-U.S. relationship.
Uncle Sam has kept up his role as the world’s policeman through bilateral and multilateral defense alliances with 68 countries across the world. The U.S. has been actively involved in global affairs through diplomatic and military means to sustain peace and order since World War II. Trump challenges this long-standing U.S. role. He claims that America is not the world’s policeman and cannot defend all the countries around the world. That’s a declaration of “America First.” In short, the Obama Pivot to Asia policy may be headed for the trash can.

Can the Korea-U.S. alliance be saved? The bilateral relationship remained fundamentally intact because it was based on the strategic interest of responding to a common enemy and its threat. But the businessman-turned-politician seems to think differently. He believes the U.S. is unilaterally doing Korea a favor to keep it safe. He does not want to tolerate Koreans’ “free-riding” off U.S. military assets. That could mean that if Seoul does not share the cost of the U.S. military presence in Korea up to a desirable level, Washington could pull out its forces. Such a move can be fatal to Korean security, which relies heavily on the U.S.

Trump’s perspective on the North Korean nuclear issue is more perplexing. At one time, he called North Korean leader Kim Jong-un a “maniac” and then offered to sit down with him over a hamburger when he visits the U.S. One thing is clear: Trump does not have the “strategic patience” with Pyongyang that the Obama administration did.

There are only two choices left — a dramatic resolution of the nuclear issue through dialogue and negotiations, or a decisive military action. The latter would be a disaster for us. Trump’s suggestion of scrapping a bilateral free trade agreement with South Korea also poses an imminent danger to the already-fragile Korean economy.

Trump’s campaign platform won’t be easy to act out. He will face constraints from Congress, opposition from the bureaucrats and military and conservative think tanks in Washington, as well as skeptical media and public. But given his persona and business style, we cannot rule out the possibility of Trump defying opposition by the conservative mainstream and pushing ahead with his agenda. How should we respond?

We could look for answers in the past. The U.S. decision to pull out 20,000 forces from South Korea following the pronouncement of the Guam Doctrine by Richard Nixon in 1969 to formalize the ending of U.S. engagement in the Vietnamese War and reduction of U.S. military presence in allied countries sent stronger shock waves than Trump has. We recovered from that shock by reinforcing our defense capabilities and improving our relationship with North Korea through the July 4 Joint Communiqué. Korea also came under heavy trade and liberalization pressure from the Reagan administration in 1982, but Korea Inc. weathered it by diversifying export markets and lobbying hard in the U.S. There is no reason to panic over the Trump shock.

The U.S.-led world order should no longer be regarded as absolute. We can draw a better strategic plan on the economy and security when we accept the changeability of the U.S.-led order. As long as we consider the Korea-U.S. alliance a “constant,” we inevitably would have to accept Washington’s request of sharing more of the costs of a U.S. military presence in Korea.

We can avoid the worst if we ready ourselves against the worst case of U.S. withdrawal of troops. Seoul should be able to argue that it does not want to maintain an alliance by taking U.S. soldiers hostage in South Korea.

The Korea-U.S. alliance serves to fight the North Korean threat. It is therefore important to solve the stalemate in inter-Korean relations. We must try to find a breakthrough in the bilateral relationship instead of blindly relying on the U.S.-led foreign policy of sanctions and pressure. The installment of U.S.-led Terminal High Altitude Area Defense (Thaad) antimissile battery and a hasty signing of a Korea-Japan military intelligence-sharing agreement were therefore rash missteps.

What this country needs now is new leadership and a new government. It is essential for national security.
Translation by the Korea JoongAng Daily staff.


*The author is a professor of political science at Yonsei University.