Korea Baseball Organization teams are paying top dollar for foreign players, with contracts for overseas talent now easily reaching $1 million, even for those in their first year.

As of Monday, four new faces from outside Korea have inked contracts with different clubs in the Korean baseball league: Sean O’Sullivan of the Nexen Heroes, Anthony Ranaudo of the Samsung Lions, Patrick Michael Dean of the Kia Tigers and Donn Roach of the KT Wiz. While it is not unusual for clubs to be searching for and signing new talent around this time of year in preparation for next season, what’s notable this year is how much the new players are making.

Korean baseball regulations allow each team up to three foreign players a season, at least one of which must be a position player on the roster. This means demand for solid throwers from overseas is rather high.

The amount of money teams have been willing to pay for such talent began to skyrocket after the KBO eliminated a $300,000 salary cap in January 2014. Korean baseball’s governing body also removed a 25 percent limit on the annual increase of foreigners’ salaries.

The regulation change created million-dollar men like Dustin Nippert of the Doosan Bears and Esmil Rogers, who briefly stayed with the Hanwha Eagles before he was relieved. Their salaries went over the $1 million mark after they proved their worth in the Korean league, Nippert in 2015 and Rogers in 2016.

On Tuesday, David Huff of the LG Twins renewed his contract for reportedly $1.4 million. After joining the team as a replacement for Scott Copeland in July, Huff became the Twins’ saving grace on the mound and put out an impressive performance despite a short stint, tallying seven wins and two losses in just 13 games.

Before this year, the only pitcher who signed a contract for over $1 million in his first year with the league was Hector Noesi of the Tigers. His bidding price was jacked up due to his age (29) as well as competition among several clubs.

But this year, teams seem to be shilling out a bit more. For O’Sullivan and Ranaudo, who will be going through their first stint in the Korean league, the value of their contracts exceeded $1 million. Even the Wiz, who rarely pour in large sums of money to reel in foreign pitchers, invested $850,000 to have Roach on their roster next year. Dean of the Tigers inked a deal worth $900,000.

The average starting salary of all four American pitchers stands at $975,000, just short of a million. This is in stark contrast to before when most of the foreign pitchers’ starting salary was around $500,000. Even Michael Bowden, this year’s starting pitcher for the pennant and Korean Series champion Bears, signed a contract worth $670,000 in his first year. 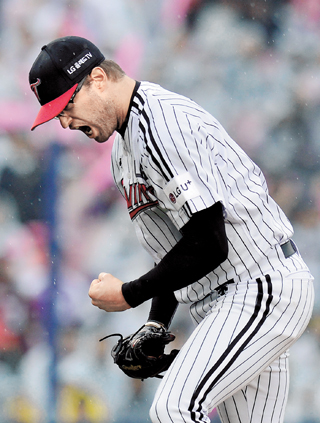 The logic behind this phenomenon is that teams in Korea want players whom they can count on and have proven themselves either in the majors or minors, largely to cut down on the cost of making a midseason replacement.

“Considering the amount of money we would have to spend to relieve a pitcher midseason and bring in another one, it’s better to have someone who’s got the proven shoulder from the start to cut that cost,” a KBO club official said.

And as the competitiveness of the Korean league rises, the level of players coming into the country has also improved. Unlike the past, when older players came to Korea just before their retirement, younger sprouts with Major League Baseball backgrounds are showing interest in playing here, which means Korean clubs have to compete not only against American teams but also scouts from the Japanese league.

“In the foreign pitcher market, there aren’t that many players that meet our expectations,” said another KBO club official. “It’s basically a price dumping war.”

“O’Sullivan is the quintessential case of what’s happening,” he added. “Teams inside and outside Korea got into a recruiting war for the pitcher and the deal easily went over a million.”

O’Sullivan is the first pitcher for which the Heroes, who have historically gone for low-cost, high-efficiency players, are paying over $1 million.

Another reason for the skyrocketing contracts is the hike in prices of domestic free agents. Choi Hyoung-woo of the Samsung Lions signed a 10 billion won ($8.5 million) contract for four years with the Tigers to become the most expensive free agent in Korean baseball history, which averages out to a little over $2 million a year.

As it has become more expensive to add heavy-hitting free agents from within the country, bringing in foreigners, who can only sign one-year deals but are still expected to perform as well as big-name free agents, has become a safer bet in terms of price-to-return ratio.

But when a team signs an expensive deal, there are inevitably risks. “Foreigner contracts are often under full guarantee terms, which means even if they are relieved midseason, teams still have to pay them a full salary,” a KBO official said, adding that clubs should systematize their scouting procedures to minimize losses.