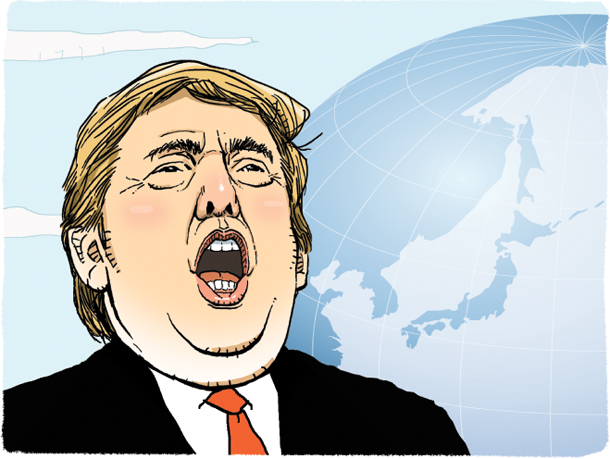 What are Americans and their Asian allies to expect from a Trump presidency? Most analysts are scratching their heads, because the president-elect seems to be walking away from many of his own campaign promises. But there are five things to watch given his more substantive speeches, comments from surrogates and promises for his first 100 days in office.

Peace through Strength. Donald Trump gave one substantive foreign policy speech during the campaign, and it now bears re-reading. In it, he revived Ronald Reagan’s election promise to deliver “peace through strength.” Ironically, this could imply that Trump is taking the pivot to Asia more seriously than the Obama administration.

In the speech, he argues for a large expansion of the Army and even the Marines, expeditionary forces that we would not seem to need given American retreat from its ground presence in the Middle East and Afghanistan. But the speech also promises a very substantial increase in naval forces: almost 85 surface vessels and submarines. The most likely theater of operation for them would be in Asia and to counter China’s rapid naval expansion and other threats in the region. This arge buildup will likely face modification from fiscal hawks in Congress. But it nonetheless fits with Trump’s Make America Great Again theme and would provide at least some assurances to the Northeast Asian allies.

Alliances. Mr. Trump has walked back from his casual talk about the alliances with Japan and South Korea, and has consistently denied that he said the two countries should pursue a nuclear option (even though he did in fact say it). In calls to Prime Minister Abe and President Park, he reaffirmed American commitment and there is little reason to doubt him on that score.

Nonetheless, Korea should take seriously his promise to renegotiate cost-sharing agreements when they come up next year. South Korean politicians and the public need to be thinking about what they want in return, for example, reopening a discussion on issues such as where bases are located, the composition of spending, the purchase of hardware and exercises.

Trade. Trump’s campaign statements with respect to trade focused largely on China and Nafta, but Japan and Korea were not far behind. Would he really tear up the U.S.-Korea Free Trade Agreement? I doubt it. But he could seek to open up particular issues for further negotiation where the U.S. sees disadvantages.

Trump’s approach to these issues is outcome — rather than rule — based. His team is likely to look at the bilateral trade deficit, which is on pace to exceed that over the last several years, and demand liberalizing moves from Seoul that would expand U.S. access. With President Park’s economic initiatives stalemated, there will be pressure to come up with new ideas and reduce frictions that American exporters and investors continue to face in entering the Korean market. This would not necessarily be a bad thing for Korea, but will no doubt run up against political resistance from protected firms and their workers.

Trans-Pacific Partnership. Mr. Trump currently appears quite serious about pulling out of the TPP. Failure to follow through on TPP constitutes a tremendous blow to U.S. credibility in the region, and its full impact is clearly not appreciated by Trump and his team.

Probably the biggest loser is Japan, as Abe staked his foreign economic policy on the agreement moving forward.

Korea’s decision to sit out TPP negotiations now looks wise. But in fact, a geostrategic challenge is now posed by the Regional Comprehensive Economic Partnership or RCEP. How comfortable is Korea in increasing reliance on a RCEP which is increasingly becoming a Chinese-led arrangement? Korea will need to be a strong voice for a relatively open RCEP.

North Korea: Uncertainty Galore. Trump argued during the campaign that China has to do more on North Korea. Exactly what remains unclear. He has also continually argued for strong ballistic missile defense, with North Korea an obvious justification.

But these are longer-term positions and Pyongyang has a habit of testing incoming presidents, both in the U.S. and South Korea. There are hints from a number of his meetings — including with President Obama — that North Korea is seen as a likely early test of the new administration and the top national security problem the U.S. now faces.

Much will depend on the broader relationship with China. If Trump opens his administration with a push against China on economic issues, it is unlikely that Beijing will cooperate on North Korea. But Trump has shown a surprising latitude with respect to foreign dictators, most notably Vladimir Putin. The U.S. already faces a foreign policy crisis in Syria as a result of Russian meddling.

Yet granting China leeway might actually have a more positive effect in Northeast Asia. Could Trump follow China’s lead back to the negotiating table? Will China exploit the opportunity if Trump is tested. Will South Korean politics permit a coherent response?

There are good reasons to believe that Trump will be pulled back toward long-standing American views of the Asia-Pacific on a number of issues, from defense commitments, to the alliances, and even on trade. But what we don’t know is how the erratic showman-cum-president will respond to a foreign policy crisis. That is currently the central source of anxiety in U.S. foreign policy circles, and sadly it should be in Asia as well.


*The author is the Krause Distinguished Professor at the Graduate School of Global Policy and Strategy at the University of California in San Diego. He is the author with Marcus Noland of the Witness to Transformation blog at https://piie.com/blogs/north-korea-witness-transformation.