Celebrating a successful first year at the ACC

Celebrating a successful first year at the ACC 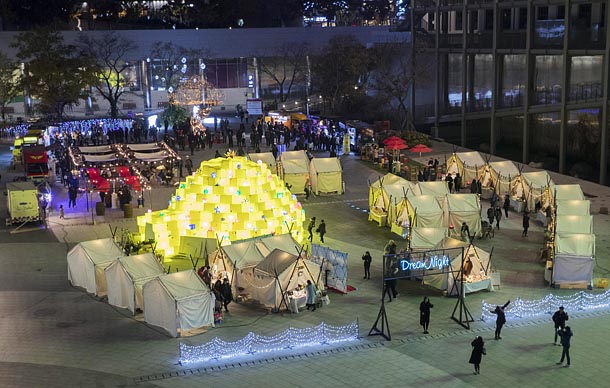 To celebrate the first anniversary of the Asia Culture Center in Gwangju, south Jeolla, a four-day long festival was organized from Nov. 24 to 27, which included outdoor events like flea markets and indie band concerts, above. [ASIA CULTURE CENTER]

GWANGJU, South Jeolla - A year ago, when the Asia Culture Center (ACC) finally opened its doors to the public with a three-week opening festival, the people of Gwangju had mixed feelings. They welcomed the idea of having a grand arts center in the city but seemed confused as to how they should enjoy the performances that have been quite experimental.

On Nov. 25, the center celebrated its one-year anniversary, and despite some concerned voices, the center has successfully organized diverse performances, exhibitions and programs, attracting nearly 30,000 people during the year.

“A year ago, we opened the ACC, hoping for it to become the center of cultural convergences in Asia and a place where artists can freely exhibit their creativity and produce great creations,” said Bang Sun-gyu, president of the ACC. “I can proudly say we’ve successfully staged 82 performances and concerts of Asian music and invited musicians from [throughout] Asia, 33 art exhibitions where artists freely displayed their works without much limitation and about 97 educational programs for the young students and children of Gwangju.”

For the celebration, the ACC organized a four-day festival from Nov. 24 to 27 and presented various multi-genre performances and exhibitions.

“The theme for this anniversary festival was set to promote the sounds of Asia throughout the world,” said Cecilia Heejeong Kim, director of the performing Art Division. “For the festival, musicians from across the globe came to Gwangju and they’ve been posting pictures on their personal social networks on how great the food is and what Gwangju looks like. I guess we’ve already achieved what we set out to do.”

According to an official from the center, it is true that performances and programs in the early days were more focused on experimental pieces, but they’ve been working to include more works that can be enjoyed by ordinary citizens to really become the “national theater” for culture and arts.

During the festival week, food trucks were set out and outdoor concerts by indie bands were staged to add to the celebratory atmosphere.

“Honestly, I’ve been living in Gwangju my whole life but I never visited here before as it’s not so visible from outside,” said Park Hyung-seok, 31, who visited the ACC on Nov. 24 to enjoy the outdoor concert. “I was quite impressed by the scale and also the upcoming programs next year. I think I’ll visit more often from now on.”