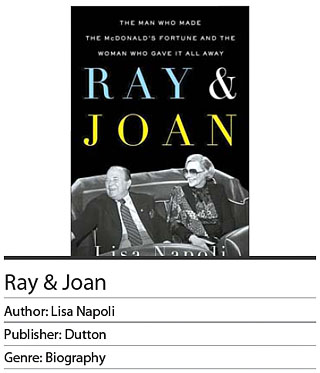 In 2012, journalist Lisa Napoli did a story about a peace monument in Santa Monica, California, that had fallen into disrepair. She soon learned the identity of the anonymous donor who had paid for it years before: Joan Kroc, heir to the McDonald’s hamburger fortune. Curiosity piqued, Napoli went looking for a biography of the philanthropist, only to discover that none existed. So she decided to tell the story herself.

The result is “Ray & Joan: The Man Who Made the McDonald’s Fortune and the Woman Who Gave It All Away,” and as the title suggests, it’s less about the impetuous, strong-willed woman whom some called St. Joan of the Arches than it is about her passionate and tempestuous relationship with the brash, driven entrepreneur behind one of the world’s most successful brands.

Both were remarkable individuals, but given the limited options available to women of her generation, it’s unlikely that Joan would have left as big a mark had she not married Ray. For him, it was love at first sight from the moment he first set eyes on her playing the organ at a fancy supper club in St. Paul, Minnesota.

Both were married, and it would take another dozen years - and a second marriage and divorce for him - before they finally got hitched. When they did, things didn’t get easier. She filed for divorce over his drinking and violent temper.

They ended up reconciling, and she channeled her discontent - and her considerable energy - into funding programs to treat alcoholism and much more.

As long as Ray, a staunch conservative, was alive, Joan mostly kept her politics to herself. After his death in 1984, she began to openly support a variety of liberal and humanitarian causes: the Democratic Party, nuclear disarmament and AIDS research, to name just a few. When she died in 2003, the Salvation Army and National Public Radio were her biggest beneficiaries.

Napoli tells their story in a brisk, efficient fashion, often sacrificing psychological complexity for melodrama. (About her new life as a socialite: “Joan found it all so boring she wanted to cry.”) She’s also prone to sweeping generalizations (“Levity was in short supply for the class of 1945”) and cliched language, noting on two occasions that Ray had ketchup in his blood.

Still, it’s a fascinating story, and it arrives at an auspicious moment. In January, the Ray Kroc biopic, “The Founder,” starring Michael Keaton, opens in theaters.