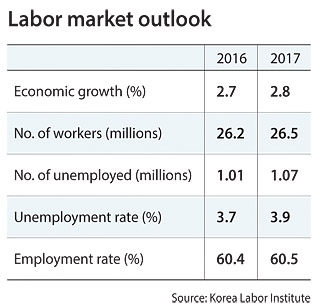 The government is extending its financial support to young people working at smaller companies. The expanded policies for young workers and women come amid growing doubts the economy will meet its growth target of 2.8 percent this year.

On Wednesday, the government said it will expand the so-called naeil chaeum accounts to include 50,000 employees at small and midsize companies. The program currently applies to 10,000 new employees who are 34 and younger.

The naeil chaeum program, which started in July, was designed to help young people land solid jobs at SMEs while building up their financial assets with assistance from the government.

The employees, who have been hired as regular workers after completing an internship, will have the opportunity to save up to 12 million won ($10,240) in two years. The employee must save 3 million won in the first two years at the company. The government will then chip in 6 million won to the employee’s account while the company contributes the remaining 3 million won.

The program was created to help young people working at small and midsize companies close the financial gap with their counterparts working at conglomerates.

“We will raise the naeil chaeum deduction as a representative program that would help SMEs’ [employees] to have long-term employment and build up their fortunes,” said Finance Minister Yoo Il-ho at an economic meeting at the Seoul government complex on Wednesday.

The Finance Minister added that the government will also strengthen its evaluation of maternity leave policies, a factor that will determine which companies will land government contracts. The new policy is designed to encourage companies to actively hire women.

The economy is facing one of its biggest challenges since its financial crisis in the late 1990s. The job market, especially for youth, is particularly concerning.

The nation’s unemployment rate for workers ages 15 to 29 is at its highest level since the 1990s IMF crisis. Since reaching a record of 12.5 percent in February, youth unemployment has hovered between 9 and 11 percent.

And the job market is expected to worsen.

Job listings on the web portal Saramin increased 59.4 percent in the first 10 months compared to a year ago to more than 165,000 postings. Job Korea said its postings rose 21.1 percent. However, most companies were hiring experienced workers rather than new recruits, the sites said.

“[The increase in job postings] could be the result of companies using our website in posting jobs have gone up but also it’s because companies are preferring experienced workers over new recruits because of the recession,” said a Saramin official. “Instead of hiring new recruits and training them from the start, companies are hiring experienced workers who can do their job immediately the moment that they are hired.”

Hiring new recruits and training them costs the businesses more.

“In order to lead a talented young workforce to find jobs at SMEs, there is a need to narrow the wage gap between SMEs and conglomerates,” said No Min-sun, a researcher with the Korea Small Business Institute. “The wage inequality [between those working at SMEs and conglomerates] turned out to be relatively higher than other OECD-member countries.”

The smaller job market won’t just affect young people. A study released by the government-funded research institution on Wednesday said the unemployment rate for next year will reach its highest level since 2001.

The Korea Labor Institute projected that next year’s unemployment rate will rise 0.2 percentage point to 3.9 percent. In 2001, it reached 4 percent. The study was based on the Bank of Korea’s economic outlook. The unemployment rate could rise higher if the economy doesn’t manage to grow 2.8 percent this year.

The Organization of Economic Cooperation and Development lowered Korea’s outlook for next year by 0.4 percentage points to 2.6 percent this week.

“The manufacturing industry, including the shipbuilding sector, will continue to undergo a management turnaround process until the first half of this year and it will raise the unemployment rate for youth significantly,” said Phang Ha-nam, president of KLI.