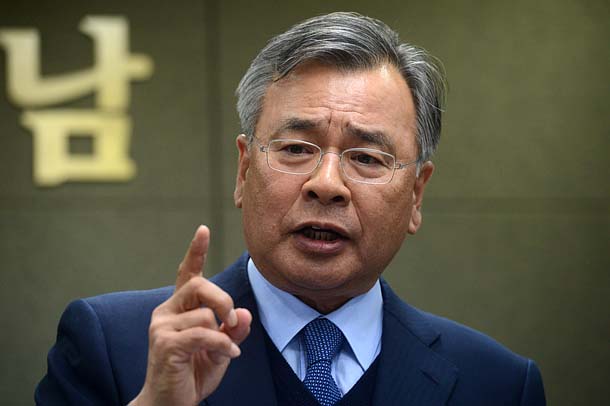 President Park Geun-hye Wednesday named Park Young-soo, former head of the Seoul High Prosecutors’ Office, independent counsel to investigate an influence-peddling and abuse of power scandal that has her administration at the edge of the abyss.

Park’s appointment of the former prosecutor came only a day after the opposition bloc recommended Park and another candidate, Cho Seung-sik, to lead what will be the largest independent counsel investigation ever to get to the bottom of an array of alleged crimes involving President Park and her controversial friend Choi Soon-sil.

“Once a special counsel begins its probe, President Park will be fully cooperative with the investigation process and explain herself by attending questioning,” said Blue House Spokesman Jung Youn-kuk during a briefing.

Park pledged a thorough and fair investigation and said he would go after suspects regardless of his or her position, an apparent reference to President Park, who is the main subject of the investigation.

“I will foremost commit myself to finding out the truth and will not consider one’s title or partisan interests in the investigation,” said Park during a briefing after the appointment.

Park, born on Jeju Island and a graduate of Seoul National University, is known for his investigative capability, especially in tracking down corruption and wrongdoing in the business world.

Park led an investigation in 2003 of accounting fraud at SK Group and succeeded in putting its chairman Chey Tae-won in jail. He also led a probe into slush funds at Hyundai Motor Company and indicted company chairman Chung Mong-koo two years later.

Park will have four assistant prosecutors supporting the team along with 20 prosecutors and 40 special investigators dispatched from the prosecution. Park has 20 days to prepare starting from Wednesday and 70 days to investigate the co-called Choi-gate scandal. Park can extend the probe by 30 days, which needs to be approved by the president, before deciding whether President Park is guilty of various charges as described by prosecutors in their indictment of Choi Soon-sil and presidential aides earlier this month.

Park will investigate the president’s involvement in giving classified material to Choi and her associates and colluding with Choi to let her meddle in state affairs for personal profit, among other cases.

According to a special law creating the independent counsel, there are 14 alleged law violations involving Park and her inner circle that the counsel is required to investigate. The law stipulates that the counsel is mandated to investigate all cases if they are related to Choi-gate, which includes Park’s mysterious absence in the seven hours after the ferry Sewol sank on April 16, 2014.

Park is accused of failing to respond properly in the first hours of the country’s worst maritime disaster. Suspicions followed that she might have been having some form of cosmetic procedure arranged by Choi Soon-sil.

A point to watch is whether the special counsel will charge Park and Choi with bribery for accepting tens of millions of dollars from conglomerates in the name of promoting cultural and sports activities in return for policy favors. If convicted of bribery, the two would be liable to a minimum of 10 years in prison. If President Park is questioned by the team, it will be the first time ever for a sitting president.