Exports rise 2.7% in Nov. but outlook ahead is iffy

Exports rise 2.7% in Nov. but outlook ahead is iffy 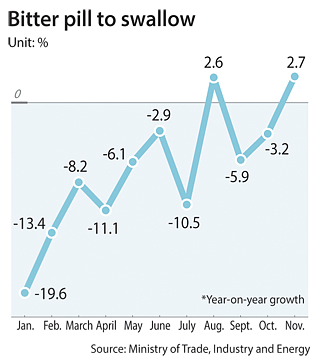 Good economic news came Thursday as Korea’s exports, which have been tumbling fairly steadily, rose for the first time in three months largely thanks to semiconductors.

But concerns remain that the bouncing back will be fleeting with growing protectionism and weak international trade.

According to the Ministry of Trade, Industry and Energy on Thursday, November exports grew 2.7 percent compared to a year ago to $37.5 billion. By volume, exports rose 3.5 percent year-on-year, which is the first time since May.

Due to the ongoing restructuring, low global demand and the discontinuation of Samsung’s troubled Galaxy Note7 phablet, vessels and telecommunications were the only two areas that saw year-on-year declines.

“Semiconductor exports rose significantly, or 11.6 percent from a year ago, as more cellphone manufacturers abroad decided to use bigger memory chips and as prices of such storage devices rose compared to the past,” said Lee Min-woo, a director at the Trade Ministry. “Exports of automobiles also rose for the first time since June 2015 as strikes by automakers came to an end. The figure rose 1.5 percent from a year ago.”

The ministry attributed the drop to the discontinuation of the Galaxy Note7 and rising competition from cheaper phones on the global market.

However, many analysts are uncertain whether exports will continue to improve due to various uncertainties such as the political chaos in the nation and the incoming administration in the United States, which could be more protectionist.

“There are many positive factors in November’s export data, but there also are downward risks, such as a slow global economy and trade volume, possible interest rate hikes in the United States and growing protectionism,” said an official at the Trade Ministry.

Some economists, on the other hand, argued that there also are some positive factors that will help the country’s export grow.

“I think there is a low chance of the incoming Trump administration proceeding with protectionism policies since they will also hurt the competitiveness of America’s own companies like Apple,” said Kim Moon-il, an economist at Heungkuk Securities. “I think Trump’s slogans about protectionism were a mere means to becoming the president and I don’t think we need to worry too much about Korea’s exports falling after the Trump inauguration.”

“Korea’s exports to emerging countries have improved and demand from such countries continue to grow,” said Park. “Oil prices are likely to rise as oil producing countries are trying to cut output, and this will help export companies get more profit from exporting since the prices of products will eventually go up.”

More government data released Thursday showed that consumer prices managed to increase more than 1 percent compared to last year for a third straight month. Korea’s inflation rose 1.3 percent last month, Statistics Korea said on Thursday. The rate remained below the 1 percent level from May to August, but it began to surpass the 1 percent level in September.

Basic living expenses rose 1.1 percent year on year. This was the highest growth since July 2014, when they rose 1.4 percent.

Service-sector prices in November rose 1.8 percent year on year. The cost of jeonse, or lump-sum deposit rent contracts, was up 3.3 percent compared to last year.

“Consumer prices rose as the fall in crude oil prices has slowed,” said Yoo Soo-young, a director at the Ministry of Strategy and Finance. “The government has decided to lower electricity bills starting from this month and we will do our best to reduce burdens for people paying basic living expenses.”

By region, consumer prices increased the most in the southern island of Jeju by 1.7 percent.

Meanwhile, Korea’s current account surplus, which is affected by broader factors such as financial transfers, widened to $8.72 billion in October from a $8.07 billion surplus in September, according to preliminary Bank of Korea data.