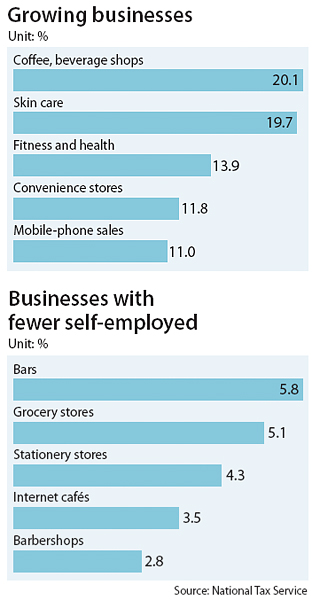 As Korea’s taste for a healthier lifestyle continues to grow, the number of coffee and beverage shop owners has risen more than 20 percent in a year while owners of stores selling alcohol fell slightly.

The report from the National Tax Services comes at a time when self-employed business risks have been rising due to economic stagnation affected by low growth.

The number of self-employed in 40 business sectors related to basic necessities, such as barbershops, restaurants and skin care, increased 3.4 percent year on year to 1.787 million people, as of August, the NTS said.

While more self-employed individuals stepped into sectors such as coffee and cosmetics, the number of self-employed who own bars or grocery stores has shrunk since August 2015.

There were 57,401 bar owners by the end of August, a 5.8 percent decrease in a year. Boosted by the vitalization of online shopping and increase in the number of large discount retailers, those who own small grocery stores have decreased 5.1 percent to 57,788. Businesses like barbershops and stationery stores also followed the downward trend.