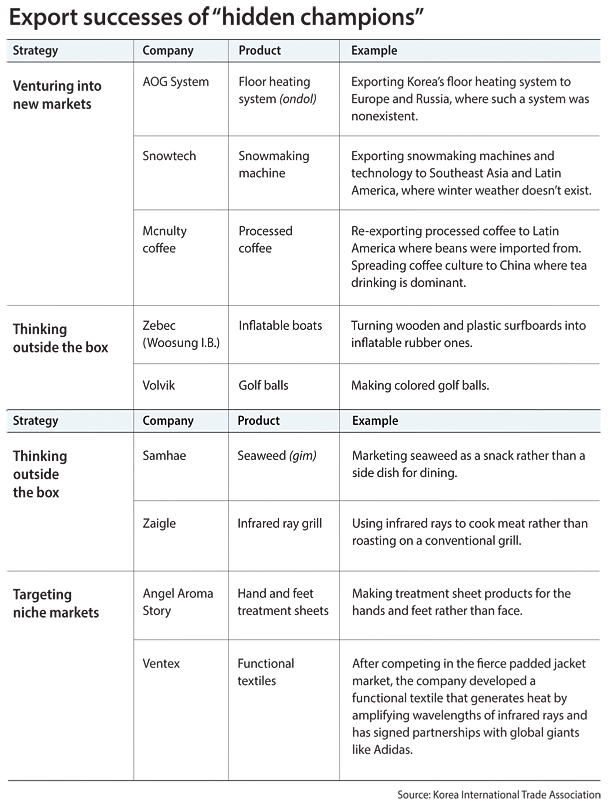 Modernized floor heating, colored golf balls and snowmaking technology - these are just a few products made by Korea’s “hidden champions,” small companies that recorded two- to three-digit export growth last year and have been cited as inspiration for seeking new markets abroad in a report released by the Korea International Trade Association (KITA) on Wednesday.

AOG System, a seller of the Korean floor heating system known as ondol, began targeting overseas markets in 2009 just a year after it was founded when it realized the Korean market was saturated and foreign buyers seemed interested in the system over the radiators and electrical heating systems they had been using.

“I had a belief that if Europeans knew about Korea’s floor heating system, they would definitely be interested,” said Lee Hee-gon, CEO of the company. “It’s partly a culture that we are exporting.”

AOG System produces a modernized version of Korea’s traditional ondol so that foreign buyers can easily assemble the system for use.

After inking their first contract in South Africa in 2010, the company has since exported its product to Russia, Ukraine, the Netherlands and Australia. According to data compiled by KITA, its export growth rate this year through September jumped three digits, though exact data had not been disclosed.

Another hidden champion cited by KITA, Volvik, recorded over 100 percent export growth this year through September with its colored golf balls. The company began making yellow balls for golfers at night and started producing balls in other colors.

Colored golf balls already on the market were mostly for winter use, as snow made traditional white golf balls indistinguishable. Instead of merely painting golf balls, Volvik decided to develop technology so that balls with color do not hurt the eyes of players on the green. The vivid colors of Volvik’s golf balls are gaining popularity especially in the United States, Japan and France, KITA said in its report.

Despite continued export declines by Korean companies, these “small giants” are finding their own way out by finding demand in new markets and applying innovation to existing products. KITA noted five key strategies that the companies have followed to turn crisis into opportunity.

The report said exporters should find new markets by creating new demand in the same way AOG System targeted the European market even though the region is not familiar with floor heating. Snowtech, a Korean snowmaking machine and technology provider, also recorded over 160 percent growth in exports last year by penetrating the Southeast Asian and Latin American markets, which don’t experience winter weather. “Overseas demand is increasing because the machine enables countries like Brazil, Thailand and Singapore to create a snow scene even though it never snows there,” the KITA report said.

Other strategies, the report said, include applying insight to existing products, targeting niche markets, expanding investment despite a sluggish economy to prepare for future growth and entering developed countries first.

Korea’s Angel Aroma Story has targeted niche markets by making beauty treatment sheets for the hands and feet rather than the face, while Kohyoung Technology, which develops inspection devices for electronics, expanded investment by building up three research centers in the United States. Kohyoung still invests 10 percent of its revenue in research and development, even though the company’s exports only rose 5.7 percent through September this year.

“Recent declines in exports are perceived as a crisis, but if we think about it another way, companies can find new opportunities out of crisis by making steps to expand exports in the future,” said Shim Hyae-chong, a researcher at the Institute for International Trade under KITA. “The nation’s exporting companies must come up with innovative ideas to strengthen export competitiveness.”