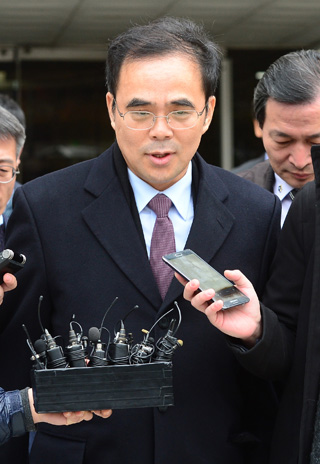 Hanyang University announced Thursday it will strip Kim Chong, the former vice culture minister implicated in an influence-peddling and abuse of power scandal, of his position to teach and do research at the school as early as next week.

Kim, a former professor at the university’s Department of Sports Industry, took a leave of absence to serve in the ministry from October 2013. He resigned from that post in October following allegations that he was involved in Choi-gate, the scandal involving the president and her friend Choi Soon-sil.

“Kim’s leave expired more than 30 days ago, when he submitted his resignation to the ministry,” said a university official, “but he hasn’t notified the school if he wants to be reinstated. The school decided that being detained for questioning is a good enough reason to remove Kim from his position.”

Kim is also suspected of forcing Grand Korea Leisure, an affiliate of the Culture Ministry, to form a fencing team for the disabled and give a management contract for the team to The Blue K, controlled by Choi. Kim was detained on Nov. 21 and is under investigation. Kim remains a professor even though he can’t teach or do research.

Students at Hanyang are demanding the school not reinstate Kim. The university announced it will give Kim some penalty, the strongest of which is dismissal, if he is found guilty of any criminal charges in the future.

“Even if Kim submits his resignation,” said the university official, “we will not accept it. If he is dismissed, he will receive 50 percent of his pension and lose all of his severance pay.”

This is the first time an academic implicated in the scandal has been punished in any way. An Chong-bum, the president’s former secretary and a former economics professor at Sungkyunkwan University, resigned from the school in October. Students at the university demanded An’s dismissal, but the school accepted his resignation. The school announced An can’t be subjected to any kind of penalties as he formally resigned.

Kim Jong-deok, former culture minister, and Kim Sang-yool, former senior presidential secretary for education and cultural affairs, also reportedly played a role in the recent scandal. The two currently work at Hongik University and Sookmyung Women’s University respectively. It remains to be seen if the schools will take any measures against them.