Baekje-era artifacts show unique and modest flourishes : ‘Splendid but not too extravagant’ era on display

Baekje-era artifacts show unique and modest flourishes : ‘Splendid but not too extravagant’ era on display 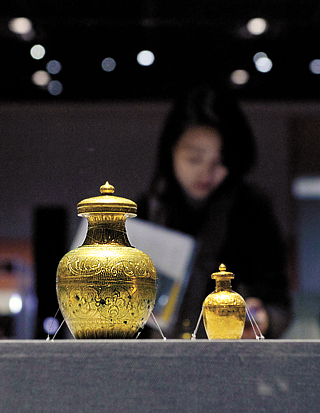 The latest exhibition on Korea’s Baekje Dynasty (18 B.C. - A.D. 660) is a place to examine some of Korea’s most precious and intricate sarira (Buddhist relic) cases. Shown here are sarira caskets found inside a stone pagoda in the site of the Mireuk Temple in Iksan, North Jeolla. [NEWSIS]

“Modest but not too shabby, and splendid but not too extravagant,” was how Baekje’s culture was described in “Samguksagi,” written in the 12th century.

An exhibition is currently underway at the National Museum of Korea, titled “Baekje, Historic Areas of World Heritage,” which display about 1,720 pieces of artifacts from the latter part of Baekje.

This is because the exhibition is partly to celebrate some areas which were important settings for the latter part of Baekje’s history being added to the Unesco World Heritage Site last year.

The “Baekje Historic Areas” refer to a group of eight sites located in Iksan, North Jeolla and Gongju and Buyeo, South Chungcheong. The eight sites include heritage items like Buddhist temple sites, stone fortresses and groups of mausoleums.

The highlight of the exhibition is, according to Kim Jin-gyeong, the museum curator, being able to see the sarira caskets from three sites; Namely, the site of Wangheung Temple in Buyeo, South Chungcheong, the royal palace at Wanggung-ri and the site of Mireuk Temple in Iksan, South Jeolla.

“The three had never been displayed together,” Kim said. “As Baekje was after all a dynasty known for its Buddhist temples and pagodas, these sarira caskets can be considered the jewel of this exhibition.”

In a Buddhist tradition derived from India, ancient Koreans placed a group of caskets containing what is alleged to be Buddha’s sarira, or relics, plus some other precious articles, in the middle of the pagoda.

That’s why in early Korean Buddhism, the pagodas were the center of the temple, although in later years a hall containing a Buddha statue became the center.

In case of the sarira caskets from the Mireuk Temple, otherwise known as the Mireuksa Temple, it was the writing on the gold plague from which the that Koreans learned the specific year in which the temple was built.

Left: Sarira cases uncovered from the site of Wangheung Temple in Buyeo, South Chungcheong. Right: Sarira caskets found inside a stone pagoda at Wanggung-ri in Iksan. [NATIONAL MUSEUM OF KOREA]

Another interesting artifact from the exhibition is a fragment of armor from 645.

Being shown to pubic for the first time, it’s likely that it was used in the battle that led to the collapse of Baekje.

It was uncovered in 2011 from the Gonsanseong Fortress in Gongju. The red letter, that specifies year 645, looks as though it was written just yesterday.

The weaponry and other articles found then are related to the Baekje Dynasty’s last battle, according to Kim.

The armor was made of leather and it was lacquered. But only the lacquered layer remains. “The lacquered armor was much lighter than iron armor and it sparkled under the sun which would have had a dignifying effect of the army visually,” she said.

Also grabbing attention at the show is the artifacts from the Tomb of King Muryeong (462-523), particularly the ornaments of the king’s and the queen’s crowns. The tomb in Gongju was accidentally found in 1971. Among the tombs from the Three Kingdoms era, it’s the only tomb whose owner is clearly known. 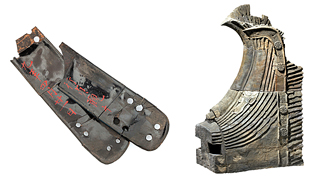 Left: A fragment of lacquered armor with inscription in red (645) Right: Chimi, a type of roof tile, from the Wangheung Temple complex. It’s known to be the oldest chimi, made around 577. [NATIONAL MUSEUM OF KOREA]

Also on display is two of Korea’s oldest chimi, a type of roof tile, found on the site of the Wangheung Temple complex, also known as the Wangheungsa Temple, in Buyeo.

The pieces found in Wangheung Temple (Historic Place No. 427) are believed to have been made around 577, the year the temple was constructed.

One fragment was thought to have been the top of a tile on northern side of a building’s roof and the other the bottom of a matching tile on the southern side. Placed together, they match. A whole tile was 1.23 meters (4 feet) high.

The chimi was first shown at a press event early November.

“Baekje artisans made chimi as a piece of art, and they decorated the roof with splendor and dignity,” Bae Byeong-seon, the director of Buyeo National Research Institute of Cultural Heritage, told journalists at the event.

It’s the first time that it’s being shown to public since.

There are a whopping 12 different types of roof tiles used in constructing traditional Korean buildings. Roof tiles have often provided important details, like when the building was made, and there are even several academic groups in Korea dedicated to studying roof tiles exclusively.

The “Baekje, Historic Areas of World Heritage” exhibition runs until Jan. 30. Admission is free. Opening hours are 9 a.m. to 6 p.m. on weekdays. The hours are extended until 9 p.m. on Wednesdays and Saturdays to encourage nighttime visits. Opening hours on Sundays and holidays are 9 a.m. to 7 p.m. The venue is close to Ichon Station (lines No. 1 and 4), exit 2. For more information, call 02-2077-9000 or visit www.museum.go.kr.