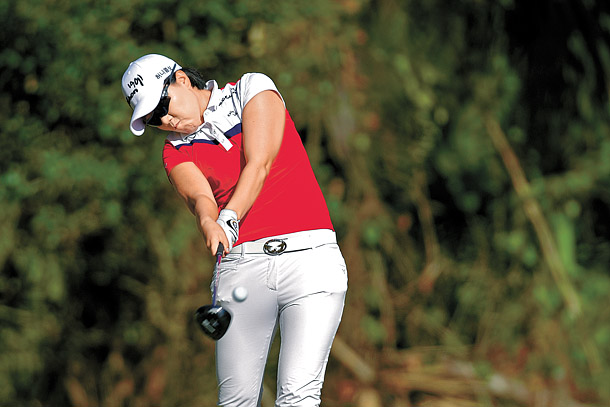 Lee Jeong-eun, 28, has earned her LPGA Tour card for next season through the qualifying tournament in her third challenge.

Lee finished alone at fifth in the Final Stage of the LPGA Qualifying Tournament in Daytona Beach, Florida, on Sunday. She shaved off three strokes in the final round at the LPGA International course and posted a five-day score of 10-under 350.

At the Q-School, players that finish in the top 20, with no ties, earn a full LPGA Tour membership for the following season.

This was Lee’s third consecutive crack at the LPGA Tour. She made her professional debut with the Korea LPGA Tour in 2006, and has had five career victories. In 2016, Lee finished 29th on the KLPGA Tour money list after competing in 29 tournaments, posting three top-10 finishes.

In the final round, Lee went out in 38 with two birdies negated by two bogeys and a double bogey. She then turned things around with five birdies against no bogey on the back nine, reeling off three straight birdies starting at the par-four 13th. Lee admitted after the round that she considered this her final attempt at an LPGA card.

“My ball striking was really off the last two times I was here and I didn’t score as well as I’d expected,” Lee said. “This year, I shot much better than the past two years. It was quite windy out there today, but I was able to make a lot of birdies thanks to my ball striking.”

Lee said it hadn’t quite hit her yet that she’d finally made it to the LPGA Tour, and added she would need to take more time to sort out her playing schedule for 2017. She said she will mix in a few KLPGA events, as well.

“I’ve always wanted to play on the LPGA Tour,” she said. “I’d love to get a win in my first year. If not, then I’ll try to retain my card for another season. I never want to return to the Q-School.”

Players who finish between 21st and 45th place, including ties, receive conditional membership for the following year. Kim Min-G, a South Korean who played on the second-tier Symetra Tour in 2016, finished tied for 35th at one-over to earn her conditional status.

South Koreans have long been the most dominant foreign contingent of the LPGA Tour. In 2016, South Koreans combined for nine victories in 33 tournaments. There are five South Koreans inside the top 10 on the women’s world rankings, led by No. 3 Chun In-gee.