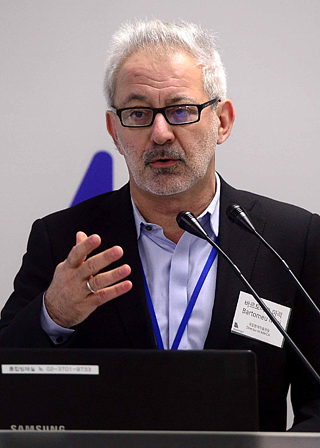 Bartomeu Mari, head of the MMCA, talks about the national museum’s plans for next year. [NEWSIS]

Bartomeu Mari, director of the National Museum of Modern and Contemporary Art (MMCA), unveiled plans to review Korean art in the global context and promote it for the next two years. They include reinforcement of the museum’s publications in multiple languages and joint research with foreign museums including the British Tate Museum.

He presented the plans in a press meeting on Monday with the first anniversary of his inauguration coming next week.

Reporters poured out questions, with many critics saying the first-ever head of the national museum has been falling short of the expectation that he would actively promote Korea art internationally or would make other visible results.

Regarding the criticism, Spain-born Mari said that a museum’s outcomes don’t become visible within two or three years and that his plans for joint research projects and publications will make long-term results.

He emphasized again the importance of publishing high-quality English-language catalogues for the museum’s exhibitions and other booklets and books, calling them “the very first instrument to internationalize Korean art.” He said he made a new position to direct the museum’s publication projects.

Regarding Korean artists’ overseas exhibitions, he explained that it requires complex procedures and cooperation with other Korean art institutions, although he is making efforts to increase them.

He added, “Promoting Korean art is not only about exports but also about making Korea a real international platform of art.”

As a “concrete example of how we internationalize Korean art without having to be spectacular,” he said the museum invited the Taipei Biennial director earlier this year to have lectures and to meet with Korean artists and experts, which resulted in the invitation of more Korean artists to the Taiwanese biennial art festival.

He also said the museum would launch the “MMCA Public Programs” which includes symposiums about Asian art with Tate Research Center Asia and curators’ joint workshop about museum collections with the Tate.

Among them, the budget for the so-called “Mari Projects” is 4.2 billion won including 1.3 billion won for exchange exhibitions with foreign museums and 300 million won for catalogue and book publications in multiple languages.

Mari also unveiled a plan to launch a permanent collection exhibition beginning around next March at MMCA Seoul, which now only has temporary special exhibitions.

But Mari gave vague answers about the national museum’s unique personnel and office system and the alleged conflicts inside the office, revealing the limit of the foreign director in understanding and grasping the Korean national museum’s complicated institutions and internal situations.