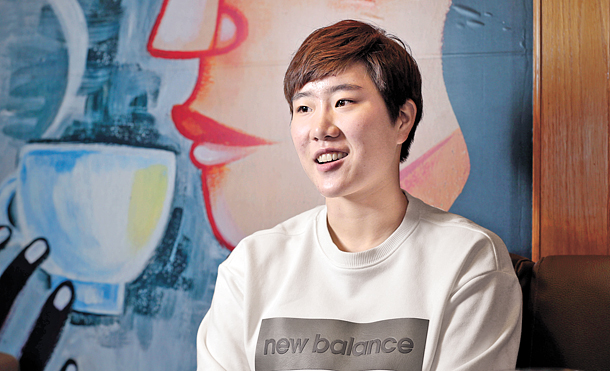 Seong Eun-jeong has an interview with the JoongAng Ilbo in Gwangju on Nov. 30. [SHIN IN-SEOP]

Seong, who spoke with the JoongAng Ilbo on Nov. 30, has long hoped to overcome Annika Sorenstam, the greatest female golfer of her generation and often regarded as the best of all time. In 1998, the year before Seong was born, the legendary female Korean golfer Pak Se-ri won the U.S. Women’s Open.

“I admire Pak Se-ri,” Seong said. “But I want to become like Sorenstam who won 72 titles in the LPGA tour.”

Seong did meet with Sorenstam at the Evian Championship in France last September.

“She recognized me!” said Seong. “She looked wonderful, as if a halo appeared around her head. I was thrilled with emotion.”

Seong is 175 centimeters (5 feet 8 inches) tall. Her head speed is 100 to 105 miles per hour, which is equivalent to the male average. “I played a round of golf with Park Sung-hyun once,” she said, “and our driving distances were similar.”

Seong played football, swam, rode horses, skied and played golf when she was young. She was outstanding in both swimming and skiing, and did well in diving, too.

“My nickname was ‘goal-getter’ as I scored a lot when I played football with the boys,” she said. “An elementary school club team tried to recruit me.”

She began to play golf as a fourth-grader. She became a national representative player in the eighth grade, but she also underwent hardship. “At a certain period,” she said, “my performance got worse. I experienced serious drive yips.”

Seong lost the winner’s cup when she was invited to play in the BC Card-Hankyung Ladies Cup last June. She was in the lead by three strokes until the 17th hole in the last round. She recorded a triple bogey at the 18th hole, which lead to a playoff round she eventually lost.

“I wailed back at home that day,” she said. “And then I forgot everything about the game.”

Though Seong can hit long shots with the best of them, she does not regard long driving as her strong point.

“Not every top-rank star player can hit long-distance shots,” she said, “but there’s not a single player who cannot putt well. Annika Sorenstam, Pak Se-ri, Park In-bee, Lydia Ko, Shin Ji-yai … you name them. They all putt very well. Putting is not a gift, but an endeavor, I think. I want to be No. 1 in putting.”