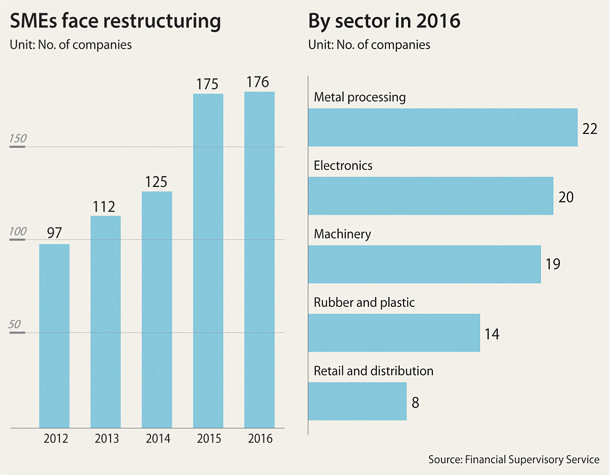 The country’s financial watchdog has identified 176 small and medium-size enterprises as targets for restructuring, the largest number since 2009.

The Financial Supervisory Service evaluates SMEs annually on their credit risks. This year, the FSS evaluated 18,961 SMEs with loans less than 50 billion won ($42.75 million), and set aside 176 to either undergo restructuring or declare bankruptcy.

The number is the largest since 2009, when authorities had more than 500 SMEs undergo restructuring in the wake of the financial crisis.

It is also one more than the number in 2015, when 175 companies were identified. While the companies that received a “D” rating remained fixed at 105 compared to last year, the number of companies rated at “C” went from 70 to 71.

The inspection is conducted by the FSS every July to October to sort debt-ridden companies and avoid the market turmoil when they suddenly go insolvent. The FSS also investigates whether a company is in a downturn, according to an FSS official.

The official said that the inspection filters out companies that need restructuring. While C-rated companies are subject to corporate workout programs laid out by the creditors, those with “D” grades are considered not salvageable, meaning they will have to restructure on their own or apply for court receivership.

The investigation was also the first since the Corporate Restructuring Promotion Act was revised in March. “Before, the inspection was only conducted on the large companies with debt over 50 billion won,” said the FSS official. “But the revision also set SMEs as subjects.

In terms of quality, there isn’t much difference between the inspections this year. However, it is meaningful that this was the first one required by law. Another significant change this year was that the revision also guaranteed rights for firms to raise objections. For instance this year, six firms objected to our decision and two of them actually had their ratings changed.”

By sector, the manufacturing industry was hit the hardest, with 155 companies rated either “C” or “D”. Of those, metal processing companies were accounted for the most (22), with nine listed as “C” and 13 as “D” companies. Eight retail distribution companies also made the watch list, while seven real estate companies were targeted by the FSS.

A total of 1.97 trillion won in credit has been given to the 176 companies, a slight decrease compared to the prior year, when 2.2 trillion won was issued. Local banks will have to raise their reserves to cover bad debts by about 320 billion won.