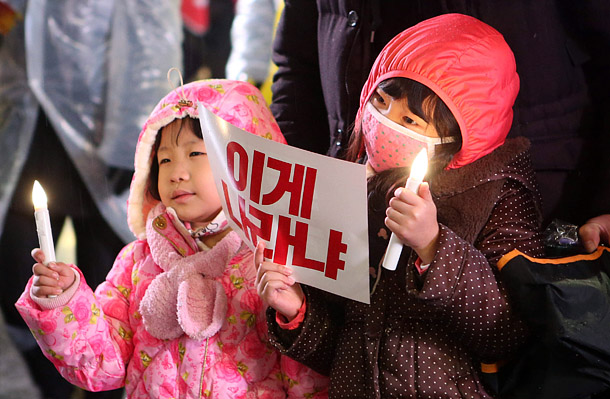 Foreign journalists are surprised by the Park Geun-hye and Choi Soon-sil scandal. Naturally, they are shocked that the president has been played by her friend. But what’s more amazing to them is the changes in protest culture.

Until now, Korean protests have been represented by images of protesters throwing Molotov cocktails and riot police firing tear gas into the crowd. Coverage of Korea often showed violent rallies and clashes.

However, this time, Koreans have protested in large numbers six times, with crowds from 20,000 people to more than two million. And there has not been a single clash. The protesters who threw firebombs and wielded bamboo spears are now gentle as lambs.

Foreign media have reported on the positive changes in the protesting culture. The New York Times wrote that the protests resembled festivals. One Associated Press headline read, “In remarkable shift, peace marks S. Korean uprising” and diagnosed the causes of the change. First, social media contributed to peaceful participation. “People have taken to Facebook and other platforms to encourage each other to protest calmly so they can bring their children to witness a part of history,” the AP said. Second, the authorities also helped by being flexible. The court allowed the protesters to march 100 meters from the Blue House. Also, instead of violent and intense struggle, the protesters decided to “use sheer numbers” to press Park, AP pointed out.

These peaceful protests may bring unexpected economic perks. There used to be a phenomenon called the “Korea discount.” Due to negative images associated with Korea, Korean products were devalued. The main causes were the North Korean nuclear threat, backward politics and violent protests. People didn’t trust that the politically backward country with violent protests would make good products. A study showed that the loss from Korea discount was as much as 30 percent. That means a 10,000 won ($9) product could be sold for only 7,000 won because it was made in Korea.

When the culture of peaceful protest takes root, the Korea discount will decrease drastically. But it is too early to rest easy. The 2008 candlelight vigil over beef imports began peacefully but turned violent due to the instigation of some groups and the poor response of the police.

The economy is already struggling, and if protests become violent, it would mean a serious loss. We would miss the perfect chance to get out of the swamp of Korea discount.