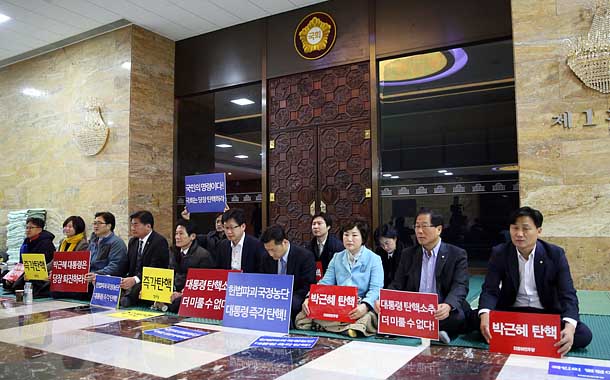 I remember writing once that “the Republic of Korea will be divided into before and after the Sewol ferry tragedy.” I really believed that no society could remain unchanged after such a shocking incident.

But I have to admit that I was wrong. Korea hasn’t changed. We can still find countless captains who have abandoned ship, who would rather seek their own interests than fulfill their responsibilities. The politicians at the helm of the nation are especially so.

The president, who should have been more alert than anyone in the aftermath of the Sewol ferry disaster, was captivated by Choi Soon-sil. She made the Republic of Korea crash into a rock that she created and is only seeking ways to save face. The ruling Saenuri Party has long been entangled in a lovers’ quarrel with the president and still refuses to sever ties with the president even as an impeachment motion is in progress. The opposition parties have the upper hand as the ruling party has made their own goals. They are enjoying their own victories but haven’t been able to survey more obstacles ahead.

Some say this is the opportunity and moment to reframe the nation. But I am skeptical now. I am in despair as the nation has regressed to the development-driven dictatorial era of the 1970s. It will be hard for the country to escape the fly trap that Park Geun-hye has set up to bring back her father’s memories.

I cannot help but make a prediction that even I don’t want to believe. Park Geun-hye’s era is over no matter how much she struggles against it. But we can expect little from the future as the potential presidential candidates and lawmakers are as irresponsible as the captain who abandoned ship. An old newspaper article I found gave me more confidence in my ominous prediction.

On Nov. 3, 1990, the Dong-A Ilbo’s political news editor, Park Gi-jeong, interviewed Sungkyunkwan University head Kim Kyung-su. The professor deplored the reality where “people worry about politics, as opposed to politicians worrying about the people.” At the time, the Democratic Liberal Party’s Kim Young-sam and President Roh Tae-woo were in a discord over the leak of a document about their agreement on a parliamentary system. “The absence of politics and calculation of interests are the causes of social irrationality,” the professor said, “and it is important to restore trust, whether it is for a presidency or parliamentary system.”

The situation has changed, but after 26 years, the people are still worrying about politics. Korean politics hasn’t improved at all. In fact, it has gone backward.

Korean politicians began by learning bad politics. Plato defined politics as the execution of good ideas. Confucius said politics was making things straight. When politicians are upright, the people will follow and the nation will be governed properly. But politicians in Korea only learned that politics was a struggle for power by any means possible. So they engaged in trickery, tactics and political engineering, and nothing ever changed.

Plato and Confucius urged politicians to be good and upright because reality was not so upright at the time. But societies have changed drastically, and today’s politics should not be the same. Has there been any country with a democracy where a great leader used political manipulation to lead the people? I cannot find a single one.

Korea is the same. Over two million people gathered to protest, and not a single windowpane was broken. When they are so civilized and mature, how can politicians still claim manipulation and trickery are politics?

I see the only hope coming from the people. Good politics comes from the participation of good people. As we light our candles and express our anger, we also need to discuss what politics we want. Even after the candlelights are blown out, we must remember which politicians are seeking their personal interests. Plato once said, “He who refuses to rule is liable to be ruled by one who is worse than himself.”