‘If other countries see strong ties, it sends a clear message’

‘If other countries see strong ties, it sends a clear message’ 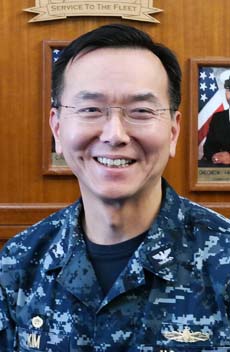 He added, “Let’s say, if other countries in the region see a strong trilateral organization, I think it sends a clear message about the strength of our purpose here.”

The Yokosuka base is considered the United States’ most strategically-located overseas naval installment, and is its largest.

Kim said of North Korea’s growing nuclear and missile provocations, “Clearly, their capabilities are greater than in the past. So we have to be vigilant, and we would have to be ready.”

While he said he could not speak in detail about the matter, he emphasized, “The readiness and vigilance has not changed, but we have to understand that capabilities on the other side have increased, as demonstrated by the testing which we see in news.”

The Seventh Fleet’s role, though it is stationed in Japan, Kim pointed out, is not intended solely to protect just one alliance.

Kim emigrated to the United States with his family when he was seven, he said in Korean. He grew up in Albany, California, and previously served as commanding officer of the USS John S. McCain Aegis-equipped destroyer based in Yokosuka from 2009 to 2010, assuming command in a ceremony held in Busan.

In July, he assumed command of the Yokosuka base, which has 13 forward-deployed naval ships, the highest number since the Vietnam War, and more than 24,000 naval-related personnel and their families.

Ronald Reagan was deployed to Korea in October for a joint naval drill Invincible Spirit with the South Korean Navy.

He added, on his feelings of serving as a Korean-American naval captain in Japan and returning to Yokosuka as its fleet activities commander, “I am very honored.”

Kim received his bachelor’s degree in aerospace engineering at the Massachusetts Institute of Technology and master’s degree in public policy at Harvard University.

U.S. Defense Secretary Ashton Carter arrived in Japan Tuesday and emphasized that countries including South Korea, Australia and India can benefit from trilateral partnerships “to provide security from one end of the region to the other.”