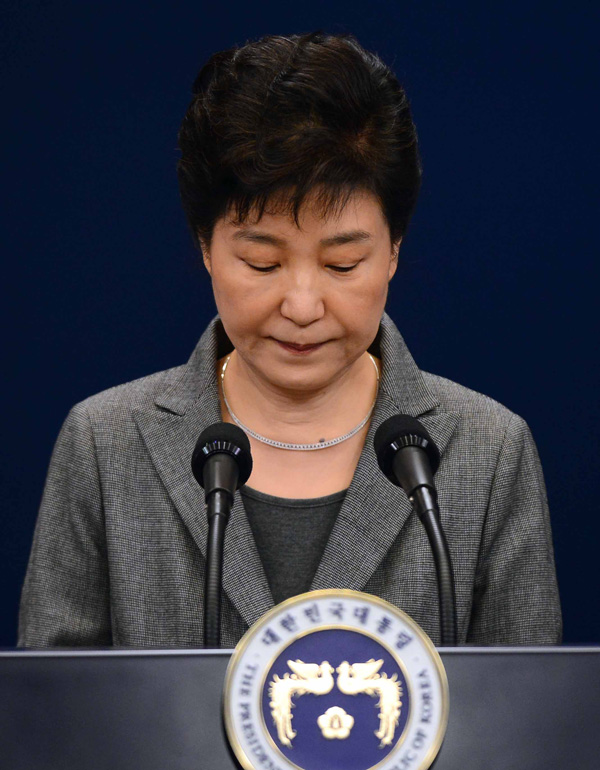 The National Assembly impeached President Park Geun-hye Friday afternoon, suspending the powers of a second-generation Korean president brought low by a bizarre scandal over the power she gave a friend in state affairs.

Lawmakers approved the impeachment motion 234-56 in a secret ballot vote. The motion to oust the president was sponsored by 171 lawmakers from three opposition parties and independents and it passed with support from representatives of the ruling Saenuri Party.
Park’s presidential powers are suspended as of the vote. Prime Minister Hwang Kyo-ahn became acting president and will oversee state affairs as the Constitutional Court deliberates the legitimacy of the impeachment.

The court has 180 days to decide whether to remove Park permanently. Six of its nine judges have to confirm the legislature’s action.
Park was impeached over alleged violations of the constitution and criminal laws. The opposition Minjoo Party of Korea, the People’s Party and the Justice Party as well as independent lawmakers who sponsored the motion said Park committed a grave violation of the constitution by allowing her secret inner circle, including longtime friend Choi Soon-sil, to interfere in state affairs.

The motion also accused Park of failing to properly respond to the sinking of the Sewol ferry in April 2014, in which 304 passengers died after a delayed government response. The motion said Park violated Article 10 of the Constitution, which demands she protect the lives of citizens.

Last month, prosecutors indicted Choi on charges of abusing her ties with the president to influence state affairs and coerce conglomerates to donate about 80 billion won ($69 million) to two foundations she controlled. They accused the president of being a co-conspirator in those crimes. Prosecutors could not press charges against Park because of her presidential immunity from criminal indictment. She can be indicted after she leaves the presidency.

Based on the indictments, the three opposition parties laid out a wide range of alleged constitutional and criminal violations committed by Park as grounds for impeachment.

Park became the second Korean president to be impeached by the National Assembly.

In 2004, the legislature voted to impeach President Roh Moo-hyun for alleged breach of political neutrality – Roh asked voters to support his party – but the Constitutional Court overturned the decision two months later.

Park is the daughter of the late Park Chung Hee, the military strongman who took power in a coup in 1961 and governed Korea until his assassination in 1979.