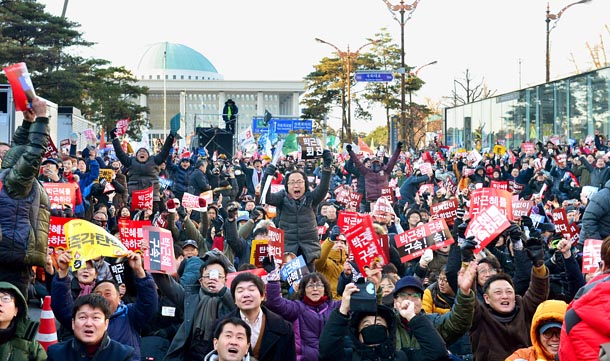 Shouts of joy and celebration rang out among the thousands gathered just 100 meters (328 feet) from the National Assembly on Friday afternoon as the motion to impeach President Park Geun-hye passed with 234 votes out of 299.

According to police, some 4,000 gathered in front of the National Assembly in Yeouido, western Seoul, and many traveled in from out of Seoul, including some 100 residents of Gwangju, South Jeolla, who chartered three buses to travel to Seoul.

Those who could not visit Seoul held local candlelight vigils in Gwangju, Suncheon, Incheon, Busan, Daegu, Jeju and elsewhere.

Shouts of joy broke out across the country at these rallies when the televised National Assembly meeting announced the decision to impeach Park at around 4:10 p.m. The celebration could be witnessed even in Park and her family’s hometowns.

“It is only right that Park takes responsibility for her violation of the constitution,” said Kim Yeon-hwa, a 47-year-old resident of Daegu, Park’s hometown. “That’s the way law works.”

“Park must submit to judicial action,” said a resident of Dalseong County in Daegu. Dalseong was Park’s district while she was a lawmaker. “Dalseong may have supported her throughout her career, but now it’s time for Dalseong to see her step down.”

“Park should have never been made president,” said Yoo Eun-joo, a 47-year-old resident of Okcheon, North Chungcheong, where Park’s mother was born. “It is right that she is impeached after she ruined state affairs.”

Other regions also celebrated the result.

In front of the Saenuri Party’s office in Gwangju, people shouted “Hail democracy!” when the impeachment motion was passed.

Some 100 Busan residents gathered in front of the Saenuri Party’s office in Namcheon-dong and shouted in joy when the motion was passed, then broke out in a song that was sung throughout the weekly rallies demanding Park’s resignation since October.

“I am so happy that Park is impeached,” said Chung Hyun-joon, a Busan resident, who showed tears at the news. “I was embarrassed that I had once supported her. The Saenuri Party must now be dismantled.”

The Saenuri Party came under fire when it decided to help Park make an honorable exit last week, saying Park should step down in late April 2017 and a presidential election be held in June 2017.

Some elderly residents in Dalseong of Daegu did express frustration and sadness over the impeachment decision.

“How can this be?” asked Kim Young-sik, an 87-year-old resident of Dalseong. “All my life I supported Park. My heart aches at the news. I could die of such sadness.”

“How dare they impeach the president,” Kim Man-soo, a 85-year-old resident retorted angrily at a community center in Dalseong. “Now what is the president to do? What will happen to her?”

The rallies, including the one in front of the National Assembly and later in Gwanghwamun Square in central Seoul, turned into festive celebrations by Friday evening.