Electricity use expected to hit high this winter

Electricity use expected to hit high this winter 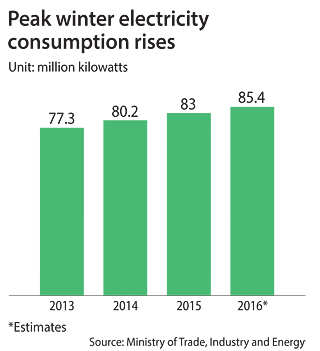 Korea’s daily electricity use is expected to exceed all-time highs this winter as temperatures could be colder than usual and demands for electricity rise.

“We believe we can prevent power outages by increasing the number of power generators that will operate during the peak season, but I urge all power plants to be prepared for the unexpectedly high demands,” Trade Minister Joo Hyung-hwan said Sunday, during a visit to Incheon Thermal Power Site Division operated by Korea Midland Power Corporation.

“We are going to run special inspections on apartment units that have relatively old electricity transformers since they might run into a power outage when consumption rises significantly,” said a Trade Ministry official.

According to data compiled by the Trade Ministry, peak electricity consumption tends to fall on Wednesdays and Thursdays and between 9 a.m. and noon during the winter.

The Trade Ministry also said it will run a campaign until the end of February to reduce power use with local corporations and civic groups. Public institutions are encouraged to keep their thermostats at 18 degree Celsius (64.4 degree Fahrenheit) and the private sector is recommended to keep theirs below 20 degree Celsius.