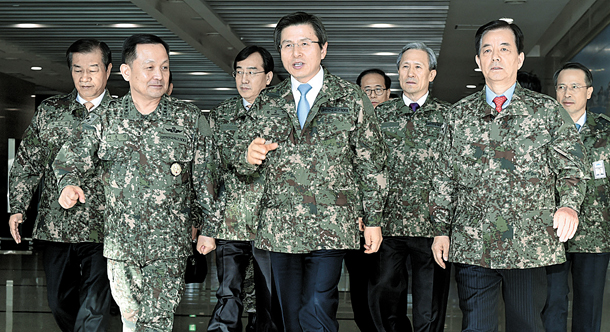 The legislature’s main opposition party demanded on Sunday that the Constitutional Court finish deliberating on an impeachment motion against President Park Geun-hye by the end of January, signaling its eagerness to jump into presidential campaign mode should Park be ousted from office.

The Minjoo Party of Korea’s open demand for a speedy deliberation came just two days after the National Assembly overwhelmingly approved Park’s impeachment 234-56. The motion heads to the Constitutional Court, which has 180 days to rule on the legality of Park’s impeachment.

That means a final verdict could come as late as June 6 next year. If the court decides in favor of impeachment, it would be the first such case in Korea, and according to the Constitution, a special presidential election must be held within 60 days.

“The court must make its judgement on impeachment by the end of January, even if it means working overnight or sacrificing weekends,” said Rep. Ki Dong-min, a spokesman for the Minjoo Party. “There is no reason to hesitate and make controversy over the timing of the verdict.”

The lawmaker called on the court’s nine justices to reflect the wishes of the people and make their decision in accordance with principles that the country must uphold.

The Minjoo Party’s demand for an early ruling appears to reflect its desire to jump into a full-fledged presidential campaign, as an election will be held soon after the court approves the motion.

The party’s demand is also a notable shift from its initial call for a cabinet reshuffle. Prime Minister Hwang Kyo-ahn, who is taking over as acting president, is viewed by the party as a willing embodiment of the Park administration’s policies.

But on Sunday, Woo Sang-ho, the Minjoo Party’s floor leader, said that while Hwang, a former prosecutor and justice minister, was not fit to be an acting president in charge of state affairs, his party would nonetheless let him manage the government to ensure stability.

The floor leader warned the acting president to refrain from making moves that could be deemed partisan. “We gravely advise Prime Minister Hwang to fulfill his role with political neutrality in mind to ensure stability in national affairs,” Woo said during a meeting with party members at the National Assembly on Sunday.

The party’s approval of Prime Minister Hwang as acting president is a departure from its previous demand for his resignation. Minjoo Party Chairwoman Choo Mi-ae suggested as late as Thursday that Hwang should also be ousted from office if the impeachment motion passes the legislature, claiming that he represents the Park administration’s controversial policies and therefore should share responsibility.

The legislature’s two other opposition parties, the People’s Party and Justice Party, also agreed not to push for Hwang’s dismissal. “Seeking Prime Minister Hwang’s resignation is unrealistic,” said Sim Sang-jeung, chairwoman of the Justice Party. “We do not have time to seek an alternative to Hwang.”

The opposition bloc’s joint decision to let Hwang run state affairs despite his loyalty to President Park reflects their desire to shift into election mode as soon as possible by keeping their pressure on the Constitutional Court.

The opposition bloc also jointly demanded that Hwang form a consultative body with the administration, the ruling Saenuri Party and the three opposition parties to manage state affairs while the Constitutional Court decides on impeachment.

With mounting calls for a speedy ruling, two of the nine court justices showed up to work on Sunday at the Constitutional Court in Jongno District, central Seoul.

“I haven’t finished looking into all the facts in the case,” Justice Kang Il-won said before reporters on his way into the court building at around 11:10 a.m. Sunday. “I came to work today to sort through all the facts and records.”

Chief Justice Park Han-chul also showed up to work on Sunday but did not speak to reporters on his way in.

Speculation circulated that the Constitutional Court will spend less time on its second-ever impeachment motion than its first deliberation, when it took 63 days to strike down a motion to impeach President Roh Moo-hyun in 2004.

It is possible that the court will deliver its ruling before the end of Chief Justice Park’s term, which falls on Jan. 31, meaning the court will have just 54 days to review the impeachment motion after receiving it from the National Assembly.

To approve the motion, yes votes from six of the nine justices are required.