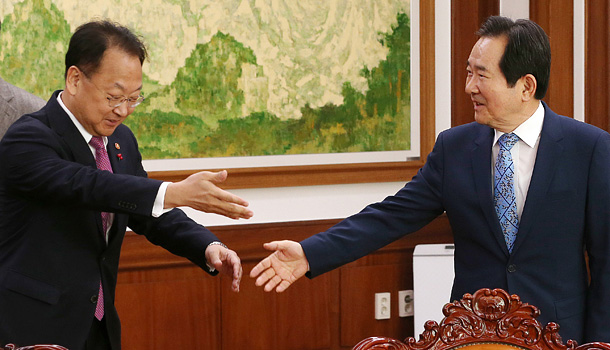 There were no jitters on the financial market’s first trading day since President Park Geun-hye was impeached.

Yet the acting head of state Hwang Kyo-ahn ordered Yoo Il-ho, deputy prime minister of economics and finance minister, to take preemptive measures against any uncertainties that may surface in the aftermath of the legislators’ vote.

“Considering how uncertainties in the recent economic and financial areas have intensified, the current [government] economic teams with deputy prime minister of economics Yoo Il-ho in the center should take preemptive actions against external and internal risks and current economic affairs with responsibility,” said the proxy president Hwang in meeting with Yoo at the government complex in Seoul on Monday. “And especially urge [that the economic team] will find ways of overcoming the current economic difficulties.”

Since Friday, the government has been trying to assure domestic players and international investors on the stability of the Korean economy, which seems to have worked so far.

Seoul’s market remained calm Monday as its main bourse crept up 0.13 percent, or 2.55 points, to close at 2,027.24, largely thanks to net purchasing by foreign and institutional investors.

This is a stark contrast from when Roh Moo-hyun was impeached in 2004, when the Kospi dropped 2.4 percent and the won depreciated 0.9 percent.

The foreign exchange market also saw a limited impact of the impeachment. Although the Korean won depreciated against the U.S. greenback, as it added 5.5 won or 0.47 percent from Friday’s to close at 1,171.4 won, market insiders say this was due to the continuing appreciation of the U.S. dollar pressured by the Federal Reserve meeting to be held this week.

“The impeachment of President Park was already reflected in the market a month ago, unlike in 2004,” said Kim Dae-joon, an analyst with Korea Investment & Securities.

Foreign credit rating agencies also considered the impeachment to have limited impact on the nation’s economy or the government itself. “Although the political uncertainty could remain a distraction to policymakers for some time, we believe the effective Korean bureaucracy will keep the government running smoothly,” S&P Global Rating said in a report Monday.

It added that the sovereign credit rating remains unchanged because there are no time-sensitive bills that need the immediate attention of the National Assembly and if there is, lawmakers will respond “adequately.”

“We anticipate that the mature institutions in South Korea will enable politics to revert to normal in due course. Any impact on domestic economic sentiments is likely to be temporary,” S&P said in its report.

Moody’s said in a statement Friday that though the impeachment will bring about uncertainty on the country’s leadership, the implications on the government and policymaking are unlikely to happen and that the finance ministry and the central bank will continue to implement policies.

Additionally, the ambiguity as to who will lead the government’s economic team has also been relatively clear, as the proxy president seemed to be in favor of keeping Yoo as the nation’s chief economist.

President Park, before being voted out by lawmakers, named FSC Chairman Yim to succeed Finance Minister Yoo. This raised concerns as to who the government economic team should follow with the outgoing and incoming leaders coexisting.

Market experts, however, considered Hwang’s decision to keep Yoo as finance minister as a move to prevent further uncertainties from building up from the vacuum of leadership, with him only being able to lead the country for a maximum of eight months. A change in the economic team for such a short period is considered to be a risk that may only raise anxiety over policy execution.

In fact, Yoo continued his role as Finance Minister when he visited the National Assembly after meeting with Hwang and thanked speaker Chung Sye-kyun for the lawmakers’ cooperation in passing next year’s budget.

“Now is a time where the country’s external credibility has never been so important,” Yoo said. “It shows to overseas credit rating agencies and investors that [passing the budget] sends out a message that even though there is an immediate movement for impeachment, the ruling and opposition parties can reach an agreement on economic [issues].”