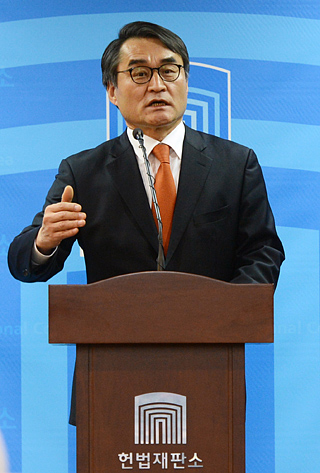 Justice Bae Bo-yoon, spokesman of the Constitutional Court, said Monday that the court will review all grounds cited in the impeachment motion. [NEWSIS]

The Constitutional Court said Monday it will scrutinize all grounds cited in the National Assembly’s motion to impeach President Park Geun-hye, indicating that the trial will be a long process, possibly as long as six months.

The court held its first meeting Monday morning to discuss how it will proceed with the trial. The National Assembly on Friday passed a motion to impeach Park for alleged constitutional and legal violations, as she gave a friend influence in state affairs.

Justice Bae Bo-yoon, spokesman of the Constitutional Court, said Monday that the court will review all grounds cited in the motion, rejecting speculation that the court would review only key charges to reach a speedy ruling.

“We cannot use our discretion to have selective hearings,” he said.

The National Assembly laid out 17 reasons to remove Park from the presidency in its impeachment motion.

“An adversarial system is the principle of an impeachment trial,” Bae said. “Unless both sides [the president and the National Assembly] agree, the court cannot just exclude some grounds in its deliberations.

“Some say that only the key issues should be deliberated,” he said. “But that is no different from reviewing a case after coming to a conclusion first.”

Bae said the ruling may contain judgements on a few key issues, but the judges will still have to go through all arguments cited in the motion.

According to the law, the Constitutional Court has 180 days to rule on the legality of Park’s impeachment.

If the court upholds the National Assembly’s motion, Park will be the first Korean president to be dismissed through the impeachment process.

Removal of the president is finalized when six out of nine justices of the court agree. During the trial, Park’s presidential powers are suspended, although she keeps her title as president.

In 2004, the National Assembly impeached President Roh Moo-hyun, but the Constitutional Court overturned the motion after 62 days of deliberation.

Bae said Park’s trial will be much different from Roh’s, who was impeached for a political remark supporting his party before a general election. At the time, the court said Roh did violate the election law, but the breach was not serious enough to remove him from office.

In its motion to impeach Park, the National Assembly laid out five counts of constitutional violations and eight counts of criminal law violations. It said she leaked confidential information to a secret inner circle including longtime friend Choi Soon-sil, abused her presidential power, coerced conglomerates to donate money and used her power as a tool for personal gain. Assisting and encouraging the secret inner circle to win special treatment and benefit, influencing private companies and exercising censorship over the press were also listed as grounds for impeachment.

The lawmakers also said Park’s nonfeasance during the Sewol ferry’s sinking in 2014 was grounds for impeachment.

The main opposition Minjoo Party of Korea has publicly demanded a speedy trial, which now seems less than likely.

It also becomes unlikely that the court will finish deliberations before Chief Justice Park Han-chul finishes his term on Jan. 31, 2017. The court will have to review the case with eight justices starting Feb. 1, 2017 unless a successor is named. Filling the vacancy, however, is not easy, because the person with the appointment power is the president.

Justice Lee Jung-mi, who will serve as acting president of the court after Park’s retirement, will end her tenure on March 13, 2017. If the court’s deliberation continues after March 13, 2017, the possibility of upholding the impeachment will get slimmer because the trial will be operated by seven justices and six of them must support it.

The Constitutional Court decided Monday to take pretrial preparation steps, citing the complexity and contentiousness of the case. Up to three judges, including Justice Kang Il-won, the chief judge of the impeachment case, will be selected to oversee the evidentiary investigation after receiving a statement from President Park.

The court asked last week Park to submit a statement by Friday. If Park fails to meet the deadline, the preparation process will still continue as planned.

The court also asked Monday the National Assembly and the Ministry of Justice to submit their opinions on the case.

A taskforce will be formed with 20 constitutional researchers of the court to assist the judges. The team is about the same size of the taskforce for Roh’s trial in 2004.

Of the nine judges, eight attended the meeting Monday. Justice Kim Yi-su was absent because his is on a Latin America trip.

After receiving the impeachment motion from the legislature on Friday, the Constitutional Court held an emergency meeting on how to proceed with the case. Through a random selection using a computer program, Justice Kang Il-won was selected as chief judge of the case.

The decision to have a pretrial preparation process is another indication that the case may go on for months. “For Roh’s impeachment, we started the hearings right away,” said Bae. “We had a preparation process for the trial on dismissing the Unified Progressive Party, although that was a different kind of a case.”

The Constitutional Court took more than a year of deliberations before granting the Park administration’ petition to disband the Unified Progressive Party for its pro-North Korea doctrine in 2014 in a landmark ruling.

The impeachment trial proceeds similarly to a criminal trial. Rep. Kweon Seong-dong of the ruling Saenuri Party, head of the National Assembly’s Legislation and Judiciary Committee, will act as prosecutor. Park has the right to form a defense team to fight the impeachment. Witnesses can be called to testify before the judges.

Park has the right to defend herself by making an appearance in the courtroom. The judges can also ask her to take the stand to testify, and Kwon, as the prosecutor, can also request her appearance after consulting with her lawyers.

It is, however, unlikely that Park will show up in the courtroom and speak for herself and there is no law to force her to do so. During Roh’s trial, the Constitutional Court had seven hearings and Roh attended none.

Questioning of witnesses will be a major part of the trial. Choi Soon-sil, Park’s controversial friend indicted on charges of influencing state affairs and coercing conglomerates to raise donations and misappropriating the money, as well as other alleged accomplices are expected to be summoned.

Tycoons, including Samsung Electronics Vice Chairman Lee Jae-young, may be asked to testify.