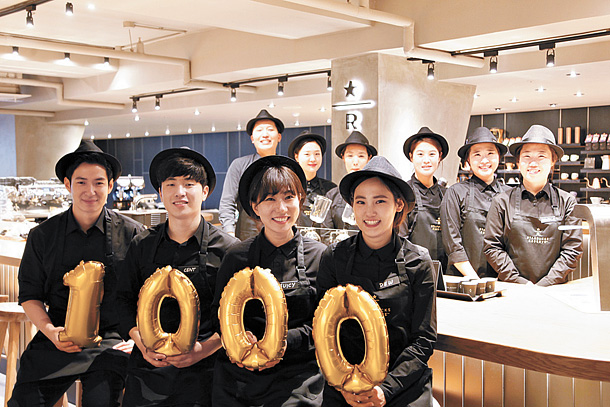 The first store opened in front of Ewha Womans University. The 1,000th is in the affluent Cheongdam-dong neighborhood and has been dubbed Cheongdam Star.

It is the seventh store in Korea under Starbuck’s “coffee forward” concept, in which the store has a luxurious interior and offers a lineup of specialty brewed coffees not available at ordinary branches.

Another distinctive feature of the store is that it has a high-end Black Eagle espresso machine. The machine is installed in only three branches of all Starbucks locations worldwide.

“A coffee forward branch is a premium-concept store which offers coffee extracted with our Reserve coffee beans brewed with diverse extraction devices,” said Starbucks Korea in a release.

Starbucks Korea said the Cheongdam Star branch will be “the most premium of all.”

The store offers 41 types of food items only available there, including homemade baked goods and sandwiches. There will be two exclusive beverages made with Reserve beans called Orange & Dark Mocha and Lavender Cafe Breve.

“This 1,000th branch, which will act as a future roadmap for Starbucks, has a symbolic meaning,” said Lee Seock-koo, CEO of Starbucks Korea.

“Starbucks will continue to change and develop to be the most suitable cultural space for our customers.”

The seven premium branches in Korea include one in Starfield Hanam, a big shopping complex in Hanam, Gyeonggi, along with a Gwanghwamun branch and a Hannam-dong branch.