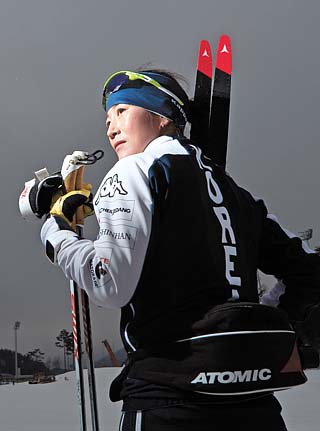 The national cross-country skier, Lee Chae-won, 35, wishes for a graceful grand finale to her career at the 2018 PyeongChang Winter Olympics in her hometown. [KIM KYUNG-ROK]

Born in a little village in the mountainous Pyeongchang County in Gangwon Province, Lee Chae-won, a national cross-country skier, had to spend two hours every day as a child walking to school and back. On her long walk in the town of Gaesu-ri, the trees and streams would keep her company.

Lee’s legs grew strong over time and her talent in sports started showing from fourth grade. She started out her athletic career in track and field, but found her true love when she skied for the first time as a freshman in middle school.

More than 20 years have passed, and Lee is now the top female cross-country skier in Korea. Cross-country skiing uses skis that allow the skier’s heels to rise off the ski while the toes remain fixed. As the name suggests, cross-country skiers must travel long distances to cross the finish line -10 to 30 kilometers (6.21 to 18.64 miles) - using only their skis and poles.

The JoongAng Ilbo met with Lee on Tuesday at the Pyeongchang Alpensia resort’s Cross-country Center. Even at a height of 1.54 meters (5 foot 0.63 inches), Lee makes powerful advances across the snow-covered fields with her 2-meter skis. On Dec. 5, Lee won a gold medal at the International Ski Federation (FIS) Cross Country World Cup in the 10 kilometer freestyle, which was held in Finland. Now, she is gearing up for another cross-country game, which will be held in the Alpensia venue on Dec. 17.

In a typical cross-country ski game, players must travel through the snow-covered course with a vertical drop of 200 meters, going up and down hills along the way. Female cross-country skiers are required to finish a distance of 10 to 30 kilometers, depending on the event.

“I can’t sleep properly on days when I’ve had severe training like doing lifts and going hiking,” says Lee, 35. “Sometimes I hear a ringing sound in my ears because I’m so tired. I’m living off all sorts of vitamin supplements.”

But Lee says she won’t give up because of her loyalty to her home, Pyeongchang, where she finished all her elementary, middle and high school education - and where she will compete at the 2018 Winter Olympics.

“As a child, I had to get water [from the village well] to make rice,” she said. “I had never come across a foreigner. But now, Pyeongchang has become such a famous tourist sight. It’s fascinating to see how much it’s developed.”

Lee is a legendary figure in the world of cross-country skiing. Since 1996, when she was in her second year at middle school, she has won 63 medals from both domestic and international winter games. Lee now has more gold medals than any other Korean winter game athlete.

In her 20-year career, she has never skipped a day of training, which includes a six-hour workout starting at five in the morning.

“I get greedier with every game I take part in,” she said. “My goal is to reach 70 medals so that it becomes harder for other people to beat me.”

The story of how Lee hid her pregnancy from those around her and traveled 20 kilometers on her skis just a month before she gave birth is widely known in the field. Her daughter, Jang Eun-seo, is now three years old.

Lee’s husband, Jang Haeng-joo, is a ski instructor and is just as supportive.

“My husband takes care of everything for me, from my clothes to my gear,” she said, “It’s thanks to his help that I’m skiing so powerfully.”

Lee came in 36th place at the 2014 Sochi Winter Olympics in the 30-kilometer cross-country freestyle event. Her goal for the upcoming Games is to finish in the top 20.

“I would like to gracefully end my career in the Olympics in my hometown,” said Lee.