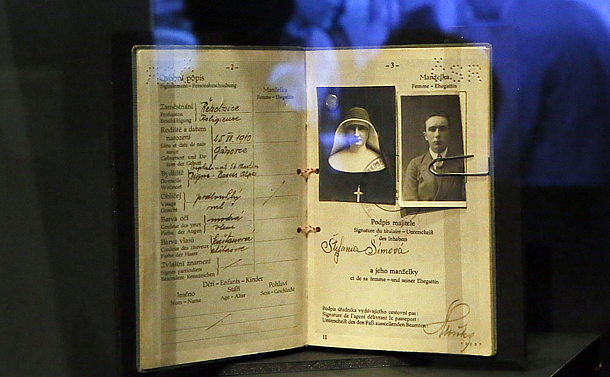 The passport of a Czech agent used to disguise as a nun is displayed with real-life spy gadgets of secret agents around the world as part of the 'Secret Wars' exhibition at Invalides Museum, in Paris, Monday, Dec. 12, 2016. [AP/NEWSIS]

PARIS — Lipstick pistols, poison pens, explosive rats — a new Paris exhibit reveals real-life spy gadgets and tells the story of how secret agents around the world were recruited, trained and equipped during clandestine missions from World War I to the end of the Cold War.

"Secret Wars," which opened last month at Les Invalides, offers a chance to relive the days before espionage went online, displaying about 400 objects, devices and archives from French, British, American and German collections, most of which have never been shown before.

Far from James Bond's glamorous life, it tells the story of men and women who put their lives at risk to gather intelligence and carry out clandestine operations, misinformation and destabilization missions.

Visitors can discover the spies' disguise kits, including wigs and fake mustaches, and their equipment, like miniature cameras and discreet audio recorders.

They can also see rare documents, such as the first mention of Adolf Hitler in French files in 1923: "not an idiot but a very skilled demagogue," the agent wrote.

Spies also used various techniques of camouflage for objects, from a letterbox in a tree branch to a pistol looking like lipstick.

A dead rat stuffed with explosives could be placed by a saboteur in a coal pile in the boiler of a locomotive — so when the rat goes into the fire, the engine explodes.

Since the creation of permanent intelligence services at the end of the 19th century, scientific and technological progress enabled experts to make spy devices and weapons ever smaller, more silent and less visible.

The "Bulgarian umbrella," actually invented by the Soviet secret services, was aiming at discreetly injecting poison in the body of a victim, causing death within days.

Among spectacular pieces are the famous Enigma machine, which was used to code communications of the Germans through a complex encryption process during World War II, and a real submarine used by the French secret agents in the 1970.

Various excerpts of spy films illustrate the fantasy and myth about the job.

But the exhibition also shows the risks of a life in the shadow.

During times of war, agents could be considered as war prisoners and face trial —and potentially a death sentence. Some agents wore rings hiding cyanide pills they could swallow in case of arrest and torture — in order not to speak.

"In peacetime, it's even more simple. They have no status at all," Francois Lagrange, one of the exhibit's curators, told The Associated Press.

The exhibit ends with secrets revealed and errors exposed in scandals making newspapers' headlines. "At first, when some elements concerning that kind of (secret) operations are revealed, it means it's a failure," Lagrange said.

Yet the greatest successes of the services long remain secret. Some agents write their memories around 40 or 50 years later.

"And that's only at that moment than we can start making the balance between what went wrong and what went well. And even later, you'll get the archives —classification of top secret documents can last from 50 to 100 years," Lagrange said. "We must wait for a long time to get confirmation of what really happened."

The exhibit is open until Jan. 29 with commentary available in French and English. AP