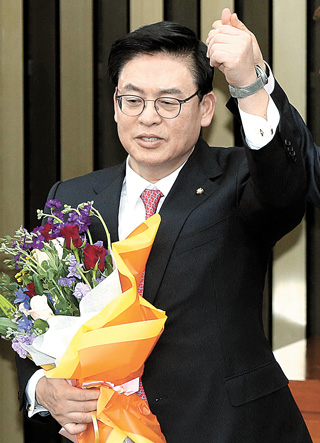 The ruling Saenuri Party on Friday elected Rep. Chung Woo-taik, a pro-Park Geun-hye faction member, as the new floor leader to steer party affairs, sparking questions about the fate of a strife-ridden party as the election result was a stunning defeat for those who voted to impeach the president just a week ago.

Chung’s surprise victory demonstrated lingering power held by those aligned with the pro-Park faction within the 128-member party, despite overwhelming support for an impeachment motion against the president on Dec. 9.

Rep. Chung, a four-term lawmaker and a former North Chungcheong Governor, defeated his rival, Na Kyung-won, also a four-term lawmaker who ran on behalf of non-Park loyalists, in a 62-to-55 in-party vote on Friday, scoring a victory seen to validate attempts by the pro-Park faction to maintain its grip on the party.

“As a floor leader I will strive to stabilize state affairs while affirming the value of national security and improving people’s livelihoods,” said the 63-year-old new floor leader in his acceptance speech, “which are the main policy tasks for the conservative Saenuri Party.”

On growing calls to defect from the party by those who sided with the opposition to impeach the president, Chung said, “I am reminded of the saying, ‘united we stand, divided we fall.’”

Chung also vowed to forestall the opposition from taking power in the next presidential election and to amend the Constitution to apply changes to the next government.

Following Chun’s election, the Saenuri’s supreme council members resigned en masse, along with the party chief, Lee Jung-hyun, giving the newly elected floor leader a dual role as acting party chief until Wednesday, when the party is scheduled to form an emergency council to steer the party.

Chung’s race, with Rep. Lee as his running mate, was supported by the current party leadership, comprising fervent Park loyalists, despite a rapid drop in party approval ratings, in addition to the presidential impeachment.

The Saenuri’s approval rating dropped to 15 percent in the latest poll by Gallup Korea, while the opposition Minjoo topped the survey with 40 percent.

Chung’s victory Friday displayed full-hearted support from pro-Park Saenuri members, whose political fates were at risk following Park’s impeachment. The 62 votes he won is the same number of Saenuri lawmakers who joined the pro-Park political alliance, called Conservative Association for Unity and Innovation, launched earlier this week to counter the growing influence of a group of anti-Park members.

There were talks among non-Park loyalists to leave the party en masse and create a new party following the impeachment, but anti-Park members decided to stay in the party largely because of their calculation that they could win the Friday race to elect Na, the judge-turned-lawmaker, and the party’s floor leader, to manage the party and drive Park loyalists out.

But with the Friday election’s stunning results in favor of the Park loyalist, the fate of the party is up in the air amid the rising possibility of a mass defection by disillusioned Park adversaries.

“The outcome today is deeply disappointing for me,” said Rep. Yoo Seong-min, a de facto leader of the anti-Park faction at the Saenuri along with Rep. Kim Moo-sung, former Saenuri chief. Regarding whether he will defect, he said he will think about it.

Former Saenuri chairman, Kim Moo-sung, already expressed his intention to defect earlier this week when he denounced pro-Park members as “fake conservatives” with a “slave mentality.” With the Friday election, eyes are on Yoo and Kim, along with other non-Park loyalists within the party. If Yoo and Kim do defect, at least 30 Saenuri lawmakers are expected to follow.

Assuming all 172 opposition and independents cast “yes” votes for impeachment, 62 out of 128 Saenuri members voted to impeach the president. The other 66 Saenuri lawmakers must have opposed impeachment, abstained or cast votes that were invalid. Rep. Choi Kyung-hwan, a core pro-Park member, did not participate in the vote.

A test of party unity is expected to come Wednesday when the party is scheduled to form an emergency council. If the membership of the emergency council is to be mainly comprised of pro-Park members, or the council chief position is taken by another Park loyalist, it will give more push to Saenuri lawmakers outside the pro-Park faction to leave the party.

The three opposition parties all expressed their disappointment with the pro-Park members’ victory to lead the Saenuri. “The Saenuri would not be free from criticisms that its choice for floor leader Friday failed to meet the demands of the people,” said Minjoo spokeswoman Lee Jae-jung. Lee added the Minjoo and the Peoples’ Party agreed to not sit down with the new Saenuri floor leader because pro-Park members should withdraw from party leadership to take responsibility for the Choi scandal.